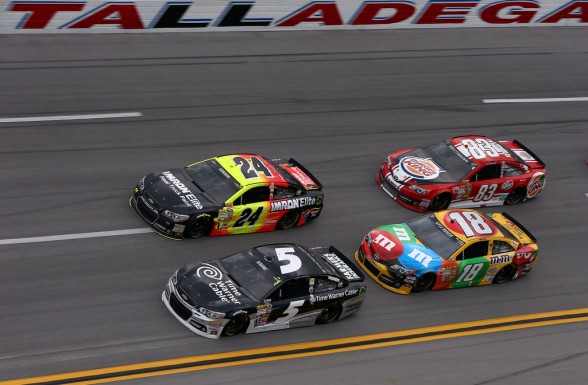 Day became night at Talladega Superspeedway as the Aaron’s 499 finished more than 7 hours after it began due to a lengthy rain delay. David Ragan and David Gilliland posted a 1-2 finish for Front Row Motorsports after a green/white/checkered restart where they drafted past Matt Kenseth and Carl Edwards at the front of the field. Jeff Gordon was involved in two separate incidents and came home with a hard fought 11th place effort.

Gordon started 9th in the Imron Elite Chevrolet and dropped out of the top-20 by lap 5 on the inside line. As is the nature of racing at Talladega, Gordon drafted back into the top-10 by lap 11. He moved to the outside line and drafted with Casey Mears up to 7th place. By lap 18, Gordon led the outside line and moved into the top-5. He ran 4th when the first caution waved on lap 21 for Trevor Bayne’s engine. Gordon came to pit road for a 2-tire change and restarted in 3rd place. He fell to 8th by lap 40. Three laps later, he sustained front end damage as he was caught in the middle of a multi-car wreck in turn 1. Kasey Kahne was turned into the wall and Gordon hit the front of Greg Biffle’s car in the ensuing melee that collected more than 10 cars.

Following repairs to the front fenders on pit road, Gordon restarted in 32nd on lap 52. He ran at the rear of the field while battling a toe-in problem. He drafted with Landon Cassill as the pair ran nearly a half minute behind the leaders. Gordon stayed out to lead during a cycle of green flag pit stops. The lead pack went by Gordon on lap 102 to put him a lap down. A caution for rain on lap 123 found Gordon in 28th place, one lap down. The intensity of the rain picked up and the event was red flagged.

After a three-hour delay, the race resumed at 7pm/eastern time. Gordon immediately went to his pit stall for additional repairs on the car. Gordon restarted in 29th place (1 lap down) with 56 laps to go. He moved to 28th after Joey Logano pulled behind the wall but was unable to keep pace with the lead draft. Following the final green flag pit stop, Gordon ran in 25th place. A caution for Michael McDowell’s wall contact with 14 to go brought out the caution. Gordon received the free pass to get back on the lead lap. He restarted 25th with 10 laps to go. He moved to 24th and was collected in a multi-car wreck in turn 3 with 6 laps to go. Gordon spun sideways on the apron and continued on to cross the line in 16th place. Gordon came to pit road to clear the grass from the front of the car. He restarted 15th for the green/white/checkered finish and moved into 11th for the finish. Gordon moved up to a tie for 13th in the series standings.

Turning point
Gordon had nowhere to go when a multi-car wreck began in front of him on lap 43. The front of the car was damaged, which impacted the handling during the event.

JG’s comments
“I thought we got lucky in that first accident. We were kind of squeezed but we made it through. But the damage was a little bit more severe than we anticipated. I also had the toe knocked out so the speed or the handling wasn’t there in the car.” 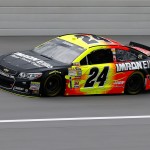 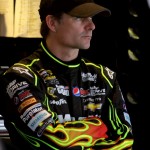 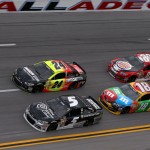 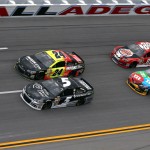