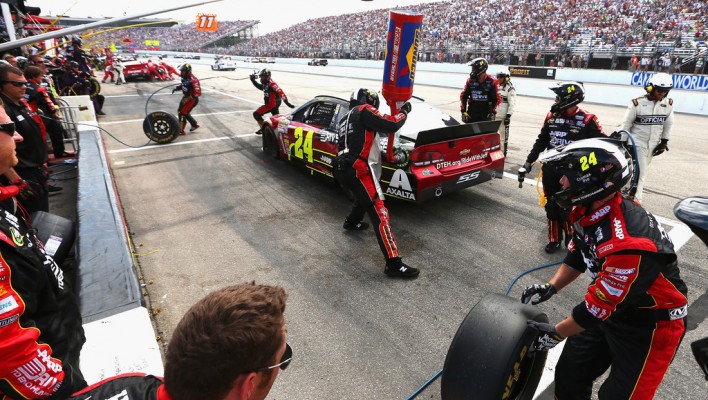 Although he ran in the top-10 for the balance of the Camping World RV 301 at New Hampshire Motor Speedway, Jeff Gordon needed a late-race rally to post a hard-fought 10th place effort. Gordon fell to 19th after a pit stop with 80 to go, and then overcame a spin with 44 laps to go. He went from 25th to 10th in the final 40 laps. Gordon moved up to 11th in the series standings, 2 points outside the top-10 Chase cutoff.

Gordon started 5th on an overcast day in New England. The first caution waved on lap 5 for Joey Logano’s spin and wall contact in turn 1. On the restart, Gordon dropped to 6th when Denny Hamlin went by. The second caution came on lap 14 for Marcos Ambrose and Casey Mears colliding on the frontstretch. Gordon moved around Dale Earnhardt Jr to take 4th on lap 22. However, while battling a tight handling issue, he fell to 5th on lap 55 when Matt Kenseth passed. Gordon came to pit road for a green flag stop on lap 77 and returned to the race in 6th place. Following a debris caution, Gordon gained 2 spots on the restart to run 4th on lap 85. He fell back to 5th prior to a caution for Denny Hamlin’s cut tire on lap 123. On the ensuing round of pit stops, Gordon opted for 4 tires and restarted in 10th place. He moved around Carl Edwards and ran 8th on lap 133. Gordon dropped to 9th just before a debris caution at the halfway point of the race. Gordon changed two tires and restarted in 8th.

Gordon advanced to 6th by lap 180. He gained 3 spots during a round of caution flag pit stops with 100 laps to go. However, on the restart on the inside line, Gordon fell to 6th before a debris caution on lap 210. Following a caution for Danica Patrick’s spin, Gordon came to pit road for 2 tires. He fell from 8th to 19th after a slower car came in for a stop directly ahead of him on exit. The next caution waved on lap 225 after Matt Kenseth hit Kurt Busch, which collected Ryan Newman. Gordon held the low line and advanced to 17th place. However, he lost 3 spots on the restart prior to the next caution on lap 238 for a crash involving Ricky Stenouse, Danica Patrick, and Travis Kvapil. Gordon came to pit road for tires and restarted in 25th place on lap 242. On fresher tires, he advanced to 20th with 50 laps to go.

With 44 to go, Paul Menard hit Gordon coming off turn 2, sending the #24 car into a spin. Gordon came to pit road for tires and restarted in 25th. He moved to 20th with 35 laps to go and took 18th from Clint Bowyer with 28 to go. Two laps later he passed Menard for 17th. Gordon kept up a swift pace with fresher tires and took 14th from Dale Earnhardt Jr with 20 laps to go. He passed Bobby Labonte for 12th with 14 laps to go and moved to 11th around Carl Edwards with 11 to go. However, Edwards moved around Gordon to drop him to 12th with 6 laps to go. A debris caution with 5 laps to go brought a green/white/checkered finish. Gordon moved up to 11th for the restart after Denny Hamlin came to pit road for tires. He moved to 10th when Tony Stewart ran out of fuel with 2 to go.

Turning point
A pit stop on lap 219 hindered Gordon’s track position. He came onto pit road running in 8th place, but departed in 19th place after having to avoid a slower car coming in. The timing couldn’t have been worse since it was the final round of pit stops for the leaders. Nevertheless, Gordon regrouped in the final 40 laps to post a 10th place effort. 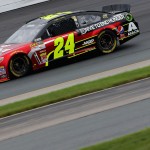 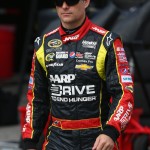 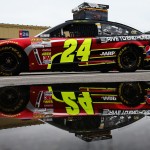 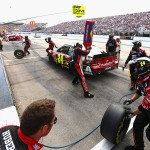