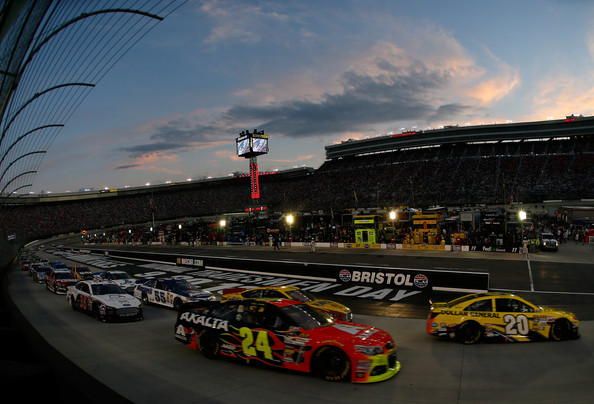 It wasn’t a much-needed victory for Jeff Gordon, but a solid 7th place finish at Bristol Motor Speedway brought him to within 11 points of the 10th place NASCAR Chase cutoff. Gordon battled for the lead late in the event, but struggled on a restart with 47 laps to go which sealed his fate.

Gordon started 32nd and gained six spots by lap 10. His forward progress continued as he moved up to 21st place by lap 30. He advanced to 19th prior to the first caution for Ryan Truex’s wall contact on lap 40. Gordon stayed on the track and restarted 8th on lap 46. Shortly after the restart, he used the high line to take 4th from Denny Hamlin. One lap later he took 3rd from Martin Truex. Gordon moved to the runner-up spot on lap 76 when Kurt Busch slowed and came to pit road. However, Matt Kenseth passed on lap 86 to send Gordon back to 3rd position. He pulled to the inside line and gave up a position to Truex on lap 88. The second caution waved on lap 90 for Josh Wise’s wall contact. Gordon came to pit road for tires and restarted in 14th place. He moved up to 12th by lap 100 before the next caution for debris stemming from contact between Joey Logano and Kyle Busch. Gordon re-entered the top-10 on the restart and took 9th from Paul Menard on lap 112. He took 8th from Ryan Newman on lap 150 and passed Aric Almirola for position on lap 159.

As the race neared the 170-lap mark, Gordon moved back into the top-5 with a move around Juan Pablo Montoya. On lap 175, race leader Clint Bowyer was spun by a lapped car. Gordon hit the rear of Bobby Labonte’s car in a chain-reaction and sustained minor damage to the nose of the car. Pit stops followed with Gordon exiting in 4th place — the second car that took 4 tires. He moved up to 3rd on lap 187 and ran behind Carl Edwards and Hamlin. The next caution came on lap 203 for Tony Raines’ wall contact. Gordon came to pit road to remove tape from the grille and restarted in 20th place. He used the high line and took 15th from Joey Logano on lap 223. As the event neared the halfway point, Gordon took 13th from Almirola and 12th from Kasey Kahne. He re-entered the top-10 at the halfway mark by passing Brad Keselowski.

A debris caution on lap 257 brought the leaders to pit road. Gordon opted for 2 tires and restarted in 8th place. He moved to 6th on lap 270 and re-entered the top-5 on lap 280. Gordon took 4th from Kyle Busch on lap 306 and held the spot until the next caution on lap 334. Following pit stops, Gordon restarted in 4th place and battled Truex for 3rd prior to a caution on lap 358 for a wreck triggered by Brian Vickers. Gordon stayed on the track and restarted 3rd behind Edwards and Truex. He dropped to 4th on the restart when Matt Kenseth went by. The next caution on lap 374 allowed Gordon to start on the high line for the restart on lap 381. He took 2nd when Carl Edwards slowed after the restart. Kenseth opened a 1-second lead on Gordon prior to the next caution on lap 439. He slipped to 3rd on the restart just before a wreck that claimed Truex, Hamlin, Kevin Harvick, and Brad Keselowski. The race was red flagged for 10 minutes for track clean-up. Gordon struggled on the restart and dropped to 7th place with 45 to go. Logano took a spot from Gordon and dropped him to 9th place with 40 laps remaining. He moved to 7th in the final stages when drivers ran out of fuel near the finish.

Turning point
Gordon restarted on the inside line with 47 laps to go and was unable to challenge for the lead after dropping back in traffic. 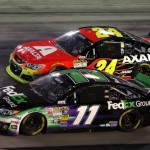 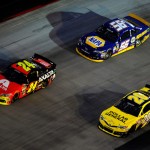 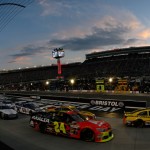 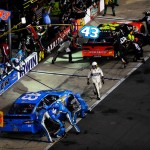 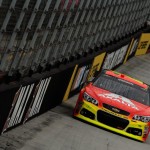 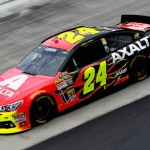 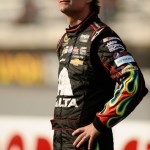