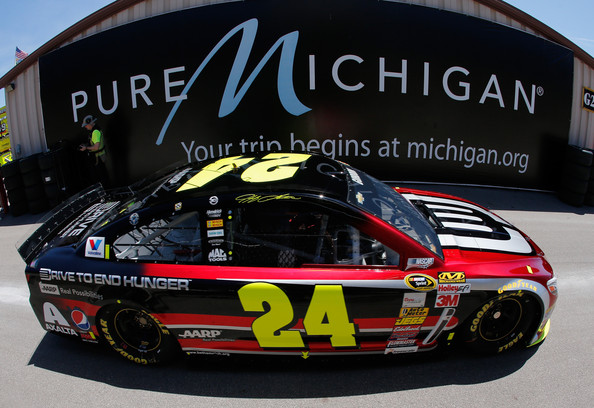 Jimmie Johnson claimed his 3rd win in the last 4 races with a victory at Michigan International Speedway. It was the 5th consecutive victory in NASCAR competition for Hendrick Motorsports. Jeff Gordon finished 6th and remains the NASCAR points leader by 15 over Johnson.

Gordon started 2nd and fell in line behind polesitter Kevin Harvick on the opening lap. The first caution waved on lap 2 for Brian Vickers spin which collected Travis Kvapil. After the restart on lap 6, Gordon again fell in single file behind Harvick before a caution for Kyle Larson spinning off turn 2. On the next restart, Gordon dropped to 3rd as Aric Almirola followed Harvick. Gordon moved back to 2nd by passing Almirola on lap 13. He took the race lead from Harvick on lap 19 and pulled out to a comfortable lead. The first round of green flag pit stops came on lap 43. Harvick passed Gordon for the race lead on lap 57. A debris caution on lap 73 slowed the field and brought the leaders to pit road. Gordon opted for two tires and restarted in 4th place. He took 3rd from Harvick on lap 85 and passed Joey Logano to take the runner-up spot on lap 101.

The next caution waved on lap 103 for David Ragan’s spin. Gordon opted for four tires during the pit sequence and restarted in 13th place. He slipped to 14th prior to a caution for Alex Bowman’s wall contact on lap 110. One lap after the next restart, Brett Moffitt spun to bring out a caution. The seventh caution came on lap 123 when Denny Hamlin and Aric Almirola got together in turn 3. Gordon came to pit road for a 2-tire change and restarted in 15th place. He dropped to 19th shortly after the restart. A debris caution on lap 147 brought some of the lead lap cars to pit road. Gordon stayed out and restarted in 5th place. He struggled on the inside line on the restart and dropped to 7th on lap 153.

Gordon came to pit road for a green flag stop on lap 166. He opted for 2 tires and a track bar adjustment during the stop. He ran 7th when the field cycled through stops. Gordon took 6th from Dale Earnhardt Jr with 2 laps to go where he finished the race.

Turning point
After losing track position because of a 4-tire change at the halfway point, Gordon stayed out on lap 147 and got off sequence from most of the field. After a 2-tire stop on the final green flag stop, Gordon was able to post a solid top-10 finish.

JG’s comments
“The car was exceptional. In my opinion, that [car] belongs in Victory Lane. We lost some track position and when we lost track position we knew it wasn’t going to handle good. But we were just super loose even when we got clean air. So that probably hurt us more than anything. We just never could move forward. At the end, we came in and took 2 tires. And boom, the thing was gone and flying again. So, 6th not really indicative of the racecar or what I felt like we were capable of, but we’ll certainly take it.” 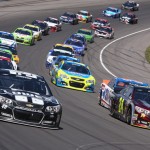 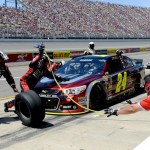 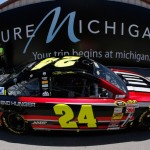