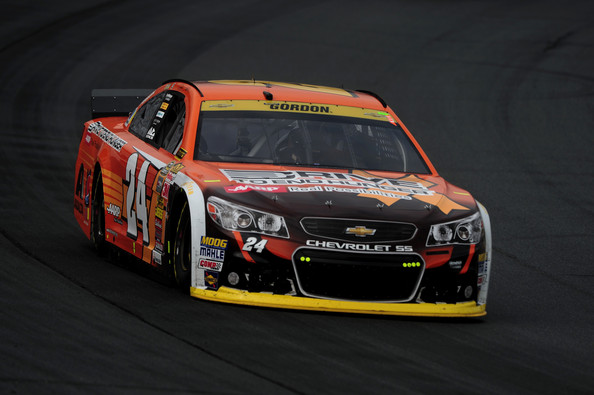 Jeff Gordon finished 26th at Loudon after a late-race cut tire while running in 6th place. Gordon has a points cushion heading to Dover for the Chase cutoff into the next round, but cannot afford another sub-20th place effort.

Gordon started 13th and entered the top-10 by lap 15. He took 7th from Kyle Busch on lap 20 and closed in on Joey Logano for 6th place prior to the competition caution on lap 35. Gordon slipped to 8th after the restart before rallying back to take 7th on lap 45. He moved past Jamie McMurray to take 6th on lap 64 and moved into the top-5 on lap 75. Three laps later he took 4th from Kyle Busch. At the 100-lap mark, Gordon ran in 3rd place. A debris caution slowed the field on lap 105. At the halfway point, Gordon ran in 3rd more than 3 seconds behind race leader Kevin Harvick. A debris caution on lap 170 brought the leaders to pit road. Gordon held the 3rd spot for the restart on lap 174. He fell to 4th prior to a multi-car crash involving David Ragan, Denny Hamlin, and Martin Truex brought out the caution on lap 180. He moved to 3rd after the restart before the next caution for a multi-car wreck involving Kyle Busch,

Kasey Kahne, and Ryan Newman. The wreck was triggered when Matt Kenseth got loose and slowed directly in front of Busch.

Brad Keselowski brought out the next caution with a spin on lap 192. On the restart on lap 199, Gordon moved ahead of Brian Vickers to take 3rd. Ricky Stenhouse’s spin brought the caution out on lap 202. Gordon dropped to 4th before a debris caution on lap 210. Vickers and Casey Mears stayed on the track and Gordon restarted 5th with 85 laps to go. He fell to 6th place on the inside line before a caution for Kurt Busch’s cut tire with 79 to go. Gordon moved into the top-5 with 70 to go and took 4th from Matt Kenseth two laps later. A debris caution on lap 246 brought Gordon to pit road for 2 tires. He ran in 19th place with 48 laps to go. Gordon ran in 17th place when Corey LaJoie spun to bring out a caution with 43 to go. Gordon came back to pit road for tires and restarted in 22nd place. He moved to 13th before a caution for Ricky Stenhouse’s crash with 33 to go. Gordon advanced into the top-10 before a caution for Matt Kenseth’s spin. With 23 to go, Gordon took 7th from Dale Earnhardt Jr. He passed Jamie McMurray for 6th with 17 laps to go. With 8 to go, Gordon cut a tire and drilled the turn 1 wall to bring out a caution.

Gordon crossed the finish line in 26th place after several pit stops to fix the damage (which didn’t go very well). It was just his 4th finish outside the top-20 in 2014. Coincidentally, he also finished 26th at Loudon in July. Gordon has a 21-point cushion in the standings heading into the Dover cutoff race for the next round of the Chase.

JG’s comments
“This place just doesn’t like us this year for whatever reason. Both races this year we just had a lot of strange things happen to us. Today we were fighting hard like we have been all day long putting a great car out there. It’s hard to get track position on the No. 22 and the No. 4 and even the No. 2 there, but I mean I was real happy with the car I thought we had an awesome race car, but it doesn’t matter if you blow a right-front tire. I’m pretty sure we cut something. I felt it go down about three-quarters of the way down the front straightaway and there is just nothing you can do. Just go along for the ride and hope the damage isn’t too bad, which we were very fortunate to still end up on the lead lap I guess.”

SEVENTH IN POINTS. TALK ABOUT HOW YOU FEEL WHERE YOU STAND GOING TO DOVER.
“Well the problem is you just can’t have things like that happen. We have a strong enough team. We went from being very comfortable going into next week’s race to now not being very comfortable. We just have to go and perform and try to make sure things like this don’t happen.” 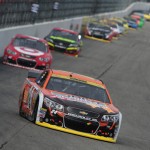 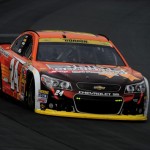 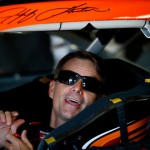