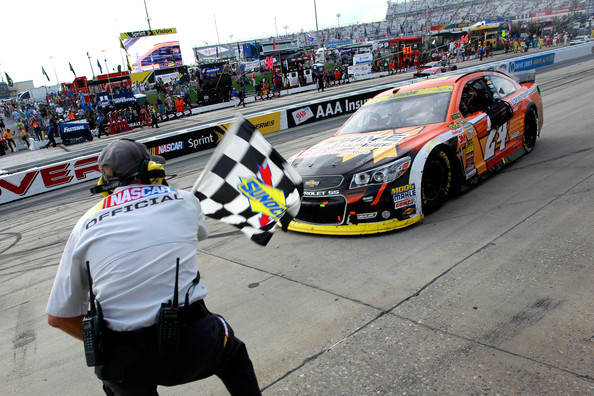 Jeff Gordon passed Brad Keselowski after the 300-lap mark and pulled away in the closing stages to win his 4th race of the 2014 season, and 92nd of his NASCAR Cup series career. This is the most wins Gordon has scored in a single season since 2007. In addition, it’s his first win at Dover since 2001. Gordon is one of 12 drivers to advance to the three-race Contender round, which includes races at Kansas, Charlotte, and Talladega.

Gordon started 6th and moved into the top-5 by the end of the first lap. He took 4th from Denny Hamlin on lap 13 and moved to 3rd with a pass on Kyle Busch on lap 25. A debris caution slowed the field on lap 62 and brought the leaders to pit road. Gordon held the 3rd position through the round of stops. He slipped to 4th after Hamlin went by on the restart. A caution on lap 74 saw the leaders stay on the track. On the restart, Gordon used the outside line to his advantage and took 3rd from Hamlin. He took the runner-up spot from Brad Keselowski on lap 119 and closed in on Kevin Harvick for the race lead. A debris caution on lap 124 brought the leaders to pit road. Gordon held the 2nd spot through the stops, but fell to 3rd after the restart when Keselowski went by on the outside. A caution for JJ Yeley’s wall contact brought out the caution on lap 174. A missed lugnut on the pit stop dropped Gordon to 7th for the restart on lap 179. He took 6th from Denny Hamlin and moved around Kyle Busch to take 5th just prior to the halfway point.

Turning point
Gordon’s car exceled on longer runs, which he used to his advantage after the halfway point of the race to track down Keselowski and pull away for the win.

JG’s comments
“I don’t know what happened to Kevin Harvick. It was unfortunate for him. He was the class of the field. We were tuning on it to try to keep even with him. When I saw him go out, I knew we could compete with the No.2 (Brad Keselowski) car. The No. 2 was really good on short runs, but we could run him down. Of course he made us work for it there at the end because he was so good on short runs and he got to me. I was really, really tight in traffic there at the end. I didn’t know if we were going to pull it off… I don’t know what I’ve found, but I think a lot of it has to do with Alan Gustafson and all the guys on this No. 24 team. They’ve just giving me such an awesome race car this year. I’m having so much fun.”

HOW IMPORTANT IS THIS WIN TOWARD GETTING THAT DRIVE FOR THE 5th CHAMPIONSHIP?
“Oh, I think this is huge. We came in here with a little bit of extra pressure because we weren’t guaranteed to be in. If we hadn’t finished where we were running at New Hampshire last week, it would have been kind of an easy day for us. But all we did was focus on executing as a team and trying to win this race and nothing else. It wasn’t about the points; it wasn’t about just squeezing by to get to the next round. It was about making a statement. I don’t know how you make a bigger statement than what this team just did right there.”

ON HIS DAY
“I have to tell you, Alan Gustafson and this whole No. 24 team they worked so hard this weekend. We struggled a bit. It was not an easy weekend. There were times when we were pretty good. Other times we needed to really work on, we just stuck together as a team. They gave me a great car today. We weren’t the fastest on the short runs, but boy if we had long runs I could get there at the end of the race. We were pretty tough to beat. They just made great adjustments. One time we got a little bit too free and luckily we didn’t fall back too much and tuned on it a little bit from there and man that thing just took off. I hated that Kevin (Harvick) had his trouble. I don’t know if we could have beat him he was pretty strong, but I would have loved to have raced him. I felt like we could beat the No. 2. He was good on the short runs, but we seemed to be able to pull ahead of him or run him down pretty good and consistently on those long runs.” 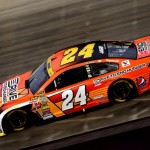 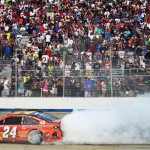 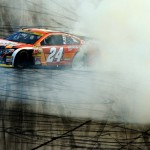 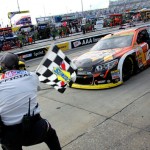 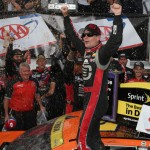 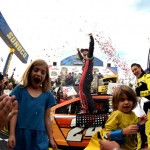