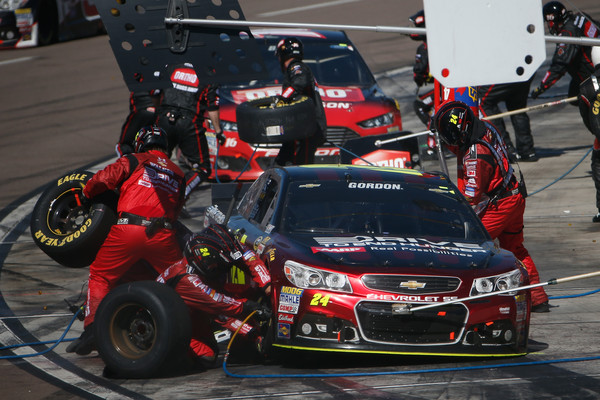 It wasn’t a victory, but a hard-fought 9th place effort for Jeff Gordon in the Camping World 500k at Phoenix International Raceway was his first top-10 finish of the season and moved him into the top-25 in the series points standings. Gordon struggled with handling at times during the event, but moved as high as 3rd place in the late stages. However, with 22 laps to go, Gordon pitted under caution for two tires. Most of the leaders stayed out and Gordon restarted in 11th place. He could only gain a couple of spots prior to the finish. At the front of the field, Kevin Harvick dominated once again en route to his second consecutive victory and the 30th win of his career.

Gordon started 10th and dropped to 12th by lap 20. He re-entered the top-10 with a move around Austin Dillon on lap 23. He gained one spot over the next 30 laps and ran in 9th place on lap 50. A debris caution on lap 67 brought the field to pit road. Gordon’s crew changed four tires and held 9th place. However, he dropped to 12th on the inside line before working his way back into the top-10 on lap 95. Sam Hornish’s cut tire and spin on lap 117 brought out the caution flag. Pit stops followed with Gordon taking four tires and restarting in 14th place. He moved to 12th by lap 130 and re-entered the top-10 on lap 141 with a move around Kyle Larson.

Gordon took advantage of the four tires by passing Kasey Kahne and Matt Kenseth to take 8th place on lap 155. He ran down Joey Logano to take 7th place on lap 176. A caution for Dale Earnhardt Jr’s wreck slowed the field on lap 181. Gordon gained a spot on pit road and restarted in 6th. He quickly moved to 5th on the restart and took 4th from Ryan Newman on lap 198. However, Kurt Busch took a spot from Gordon prior to a debris caution on lap 200. On the restart, Gordon dropped to 6th when Jamie McMurray went by. A debris caution on lap 226 slowed the field and brought pit stops. Gordon took 2 tires and exited in 3rd place. He dropped to 4th prior to a caution on lap 235 for Tony Stewart’s spin. Gordon took 3rd from Logano on the restart.

With 23 laps to go, Tony Stewart’s cut tire brought out the caution. Gordon came to pit road for a 2-tire change and restarted in 11th place with 18 to go. Danica Patrick’s spin brought the caution with 16 to go. The restart came with 13 laps to go. Gordon gained two spots prior to the end to finish 9th — his best finish of the 2015 season. 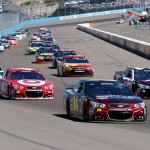 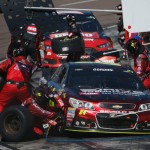 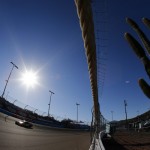