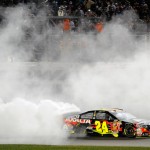 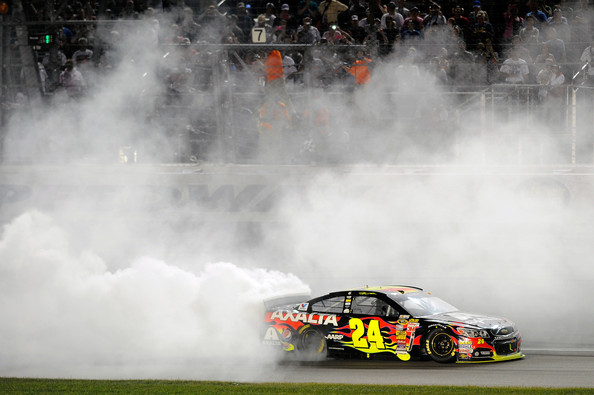 Jeff Gordon scored his 89th career win in the 5-Hour Energy 400 at Kansas Speedway. Gordon battled back from an ill-timed caution flag on lap 111 which put him deep in the field. He moved ahead of Kevin Harvick after the final green flag pit stop sequence with 30 laps to go and edged Harvick by 0.11-seconds for the win. It was Gordon’s 3rd victory at Kansas, and he essentially clinched a spot in the 2014 Chase for the Championship.

Gordon started 13th and moved into the top-10 within 8 laps. He advanced to 7th by lap 20 and took 6th from Kurt Busch on lap 23. Gordon stayed out to lead a lap during a cycle of green flag pit stops on lap 44. Clint Bowyer’s spin brought out the first caution on lap 47. Gordon restarted in 6th place on lap 52. The second caution came on lap 60 for a multi-car crash involving David Ragan, Landon Cassill, Michael Annett, and Ryan Truex. Gordon stayed on the track and restarted in 5th on lap 65. He took 4th from Carl Edwards on lap 70 prior to the next caution for Denny Hamlin’s spin. After the restart, Gordon tracked down race leader Kevin Harvick and moved to the runner-up spot. Gordon came to pit road for a green flag stop on lap 100. Marcos Ambrose’s spin on lap 111 brought the caution, which briefly trapped Gordon a lap down. He took the wave-around during the caution period to get back on the lead lap. Gordon restarted in 18th place on lap 119.

He struggled to make headway and ran 17th when the caution waved on lap 151 for Jamie McMurray’s crash. Gordon came to pit road for tires and restarted in 15th place. He quickly moved to 13th on lap 162 and took 11th from Brian Vickers on lap 170. Gordon re-entered the top-10 on lap 173 with a move around Ryan Newman. He ran 9th when the caution waved on lap 180 for Kurt Busch’s spin. Gordon opted for two tires and restarted in 8th place. The next caution came on lap 186 for a hard wreck involving David Gilliland and Justin Allgaier. The restart came on lap 194 with Gordon in 8th place. He immediately took 7th from Danica Patrick and passed Kasey Kahne for 6th on lap 198. Kurt Busch brought another caution with a spin on lap 202. Gordon stayed out and restarted in 5th place. He took 4th from Kyle Busch with 59 to go and moved to 3rd around Dale Earnhardt Jr with 56 to go. Gordon moved back into the runner-up spot with a move around Joey Logano with 48 to go.

Gordon steadily closed in on Harvick for the race lead. He chopped Harvick’s lead down to 1.5 seconds prior to a green flag pit stop with 30 laps to go. Following stops, Gordon moved ahead of Harvick and extended to more than 1-second in front. He re-assumed the race lead with 9 laps to go.

Turning point
Gordon came to pit road in 2nd place for the final green flag pit stops with 30 laps to go. After the cycle of stops, Gordon had taken the race lead from Kevin Harvick who waited one lap later than Gordon to make his final stop.

JG’s comments
“I knew we had a fast race car. We have been bringing fast race cars every single weekend. It’s just given me so much confidence in the race cars and the race team. I have got to thank Axalta Coating Systems they are an awesome sponsor. When the lights went out we could still see this thing out there. You know Kevin (Harvick) was tough. He was so strong I did not know if I could hold him off. I almost didn’t there at the end. I caught traffic. The car just got extremely loose on me and he was just coming. Luckily that was the checkered flag. I’ve got to say Happy Mother’s Day. What an amazing Mother’s Day present this is going to be. I can’t wait to see my wife Ingrid and my mom tomorrow. It’s going to be an amazing celebration. What a huge weight lifted off this team’s shoulders. We have been leading the points but we needed to get to Victory Lane and they proved they were capable of it. Great job by them.”

WHAT WAS THE KEY TO WINNING THIS RACE?
“I think it was overcoming a lot of adversity. We had a lot of things in the first half of the race that did not go our way. We knew we had a fast race car. We weren’t sure if we had as good of a race car as Kevin (Harvick), but I thought if we got in front of him we could hold him off. Then that last pit stop I mean we cycled out in front of Kevin and it was confusing because there were guys still out there so we were in the lead. I pulled away from him. The car was just driving unbelievably and then all of a sudden I started getting extremely loose. He faded but then he kept coming back on me. Then my car would tighten up and I would go forward again and then he would fade. We just kept going back and forth, but the key was getting out front and this pit crew and Alan Gustafson and all these engineers, everybody at Hendrick Motorsports they actually won this race. We have been building up to this all season long.”

ON HIS RUN:
“I don’t know what it is about this team, this No. 24 car and us here at Kansas on inaugural nights or days but I love this place, such a great race track. Some of the best race fans we have, so thanks to them for coming here for a Saturday night race before Mother’s Day. What an incredible job by this Axalta Coatings Systems No. 24 race team. I’m just so proud of them. They have been giving me the best race cars all year long. I have been having so much fun. I’m going to be 43 (years old) this year and I feel like I’m 25 again. That is the way they make me feel. Credit goes to them not only for the race cars, but the pit stops and just sticking with it tonight. We had a lot of things that didn’t go our way in the first half and then in the second half we just stuck with it. We were just grinding it out and then that last pit stop got us out front and it was awesome.”

IT LOOKED LIKE FOR YOU GUYS THIS RACE HAD JUST ABOUT EVERYTHING IN IT:
“It really did. It was great to see the groove widen out and get a top groove going and a bottom groove and a middle groove. It was a lot of fun racing out there. Kevin (Harvick) was really strong. I felt like there were times that if I could get in front of him I thought we could keep him behind us and we had to prove that there at the end. I almost didn’t do it. Luckily we got to the start/finish line ahead of him, but congratulations to him. The relationship that we have at Hendrick with Stewart-Haas is a very tight one that we share a lot of information. Those guys have been so strong. We have been strong, it’s fun to go out there and race those guys for a win like that.”

NOW THAT YOU HAVE THIS WIN ALL THE FRUSTRATION FROM BEING SO CLOSE CAN GO AWAY NOW:
“Well that is where being coming up on 43 (years old) can pay off because I’ve got a lot of patient (laughs). To me, yeah there were moments of frustration like California when we were leading on the last lap and the caution came out and we finished deep in the field. That was frustrating. There have been a few moments this year where it has been frustrating but all in all it’s been more excitement and just pride in the team and just having fun driving fast race cars. I knew it was just a matter of time. I didn’t know if it was going to happen tonight I will be honest. We were kind of catching Kevin (Harvick) there before the last pit stop and then we took four tires and I didn’t know how it was going to all cycle out when we were out in front of them. I was like ‘boy this is not going to be easy to hold him off.'” 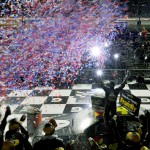 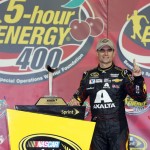 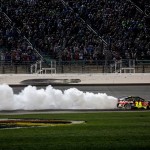 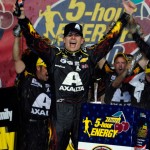 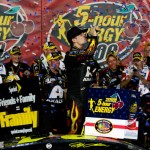