You are here: Home / Archives for Capitol City 400 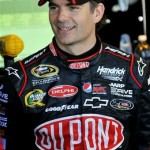 Once again it was the wrong place at the wrong time for Jeff Gordon as an early race cut tire sealed his fate before the race was an hour old. Contact from Aric Almirola sent Gordon into Greg Biffle’s car in turn 1 resulting in a cut tire. Gordon was unable to make up the two lost laps and finished 23rd — his 6th finish of 21st or worse in the last 11 races.

Gordon started 6th and fell to 10th in the opening 10 laps while battling a tight handling condition. He dropped four more spots by lap 30 and ran half a lap behind the leader. A competition caution brought the lead lap cars to pit road on lap 50. On the restart, Aric Almirola pushed up the track into Gordon’s line. The #24 car sustained damage after hitting Greg Biffle in turn one. Gordon limped around the track and came to pit road with a flat tire. Gordon lost two laps after the green flag pit stop and ran in 35th place. A caution on lap 117 for Kurt Busch’s spin kept Gordon from going a third lap down as race leader Carl Edwards was closing on the #24 car. Gordon moved up to 31st place by lap 130, but remained two laps down.

He pitted under green on lap 205 during a cycle of pit stops and remained two laps down on the track. During a debris caution period on lap 230, Gordon stayed on the track for the wave-around and restarted 1 lap down in 29th place. However, he fell 2 laps down when race leader Kyle Busch went by on lap 301. Gordon came to pit road for a green flag stop on lap 304. As the laps wound down, he moved up to 25th place, but remained two laps down.

At the front of the field, Kyle Busch beat the field off pit road on a late race caution and pulled away from Dale Earnhardt Jr to win his first race of the season and 24th of his career.

Turning point
Contact from Aric Almirola’s car on a restart on lap 53 sent Gordon into Greg Biffle’s quarterpanel resulting in a cut tire. 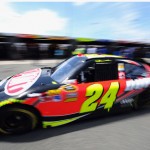 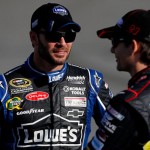