July 27 – – Jimmie Johnson hung around long enough and was in the right spot at the right time to claim the win.  That’s been a similar refrain over the last four years in the NASCAR world.  Johnson scored back-to-back victories in the Brickyard 400 at the famed Indianapolis Motor Speedway with a late pass on Mark Martin.  The victory was his third win at the Brickyard, and 43rd of his career.

Jeff Gordon battled through race traffic but was unable to make significant headway due to several long green flag runs.  Gordon started 22nd and dropped a few spots in the opening laps.  He hooked up in a draft behind Kevin Harvick and moved up to 21st on lap 8.  He cracked the top-20 on lap 11 and settled into the 20th position.  Gordon moved up to the 15th spot following green flag pit stops on lap 37.  A caution for Kyle Busch’s cut tire and subsequent contact with the wall on lap 57 brought the field to pit road.  Gordon exited the pits in 13th place, having benefited from a stall opening in front of him due to Joe Nemechek dropping out of the race in the opening laps.

Gordon used the inside line to his advantage on the restart and moved into 11th position on lap 65.  He entered the top-10 on lap 67 and ran in 10th until the next round of pit stops on lap 91.  Gordon moved to 8th with a pass on Dale Earnhardt Jr. on lap 100.  However, he gave the spot back to Earnhardt Jr. during the final round of green flag pit stops with 35 laps to go.  He trailed his Hendrick Motorsports teammate for just two laps as the engine expired on the #88 Chevrolet on lap 128.  Gordon restarted in 8th position with 26 laps to go.

As Gordon faded on the restart, his Hendrick Motorsports teammate Johnson took the lead from Martin with a power move on the outside entering turn one.  Gordon fell to 10th before passing Matt Kenseth with 22 laps to go to re-assume the 9th spot. 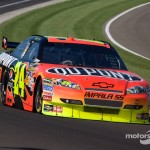 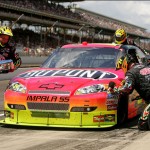 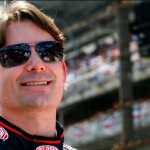 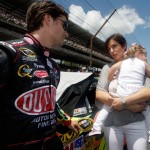 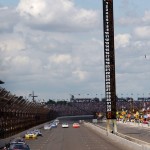