You are here: Home / Feature / Bristol II In Car Audio

August 23 – – Jeff Gordon’s 23rd place finish in the Sharpie 500 at Bristol Motor Speedway closed out an inconsistent summer stretch in which he has posted just two top-5 finishes in the last 7 races. At Bristol, Gordon worked his way up to 8th from his 33rd place starting position, but battled a loose handling — and damaged — car in the second half of the race. He went two laps down before gaining one back late in the event. At the front of the field, Kyle Busch held off Mark Martin for his fourth win of the season.

Gordon started 33rd and fell back to 35th within three laps. The first caution came on lap 11 for Joey Logano’s cut tire. Gordon came onto pit road for a four-tire change. He restarted in 32nd place on lap 16, and followed Michael Waltrip in traffic on the outside line to move to 28th place on lap 25. He eventually got around Waltrip and moved to 25th on lap 30. Gordon held the outside line but couldn’t move forward due to race traffic. The second caution waved on lap 64 when Denny Hamlin cut a tire. Gordon had advanced up to 24th position by running an extremely high line in the corners. Pit stops ensued with Gordon exiting in the 24th spot. On the restart, he held the high line and got a strong run up to 22nd. He entered the top-20 on lap 85 with a pass on Robby Gordon.

Gordon moved to 19th by lap 100, but began losing grip off the corners. He fell to 21st over the next 30 laps and needed a caution flag for more adjustments. He got the caution he needed on lap 135 after A.J. Allmendinger broke a brake rotor. Gordon came to pit road and had the benefit of an opening in front due to Regan Smith having been lapped. He restarted in 20th place on lap 141 and quickly gained three spots. He moved to 16th on lap 151. A caution for Bobby Labonte’s spin on lap 163 brought the caution. Gordon came to pit road for a tire change in an effort to fix a tight handling condition. He moved to 17th on lap 173, and took 14th on lap 177 due to the fresher tires. The high line was again preferred as Gordon moved to 12th on lap 187. Three laps later he passed Greg Biffle to move into the top-10. At the 200 lap mark, Gordon was up to 8th position.

Martin Truex took the 8th position from Gordon on lap 220. The caution waved on lap 255 for debris from John Andretti’s car. Gordon came to pit road in 9th place and departed in 12th. He briefly moved into the top-10 before dropping back to 13th on lap 280. Five laps later, he fell to 15th while he continued to battle loose handling issues. Dale Earnhardt Jr passed on lap 293 to put Gordon back in 17th. By lap 310, he fell to 21st, and was back in 25th on lap 319 as the leaders approached to put him a lap down. Jimmie Johnson passed on lap 330 to put Gordon one lap down. His problems were exacerbated as Brian Vickers was lapped, meaning that Gordon was not the first car one lap down. The caution waved on lap 356 after David Gilliland hit the wall. Vickers received the free pass to get back on the lead lap. Gordon restarted in 24th and battled to be the first car one lap down. However, he fell to 26th as the laps wound down. With 100 laps to go, he was mired in traffic in 26th place and had no chance for the free pass. Gordon went two laps down on lap 406. He got one of the laps back by staying out under a brief caution for a passing rain cloud.

Martin Truex’s cut tire brought the caution with 20 laps to go. Jeff Burton received the free pass just ahead of Gordon. The restart with 15 laps remaining saw Kyle Busch pull ahead of Mark Martin. With 9 laps left, Michael Waltrip’s wreck brought the caution, but David Stremme was ahead of Gordon to get the free pass. At that point, Gordon’s fate for the night was sealed with a 23rd place effort. 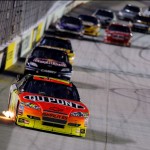 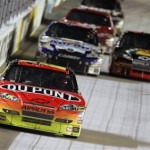