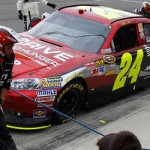 Rewind: Starting deep in the field, Jeff Gordon powered up to 15th in the first 150 miles. Gordon noted improvements in the car after each pit stop. However, he was unable to make headway beyond 12th place and dropped to 17th by the halfway point. With 50 to go, Gordon fell to 20th and was struggling to stay on the lead lap. Crew chief Alan Gustafson had led Mark Martin to three straight top-6 finishes at the track, and Gordon was strong in both races in 2010. The duo seemed to hit on a setup that worked during practice on Saturday while posting the 5th fastest speed, but faltered during the main event on Sunday. Gordon struggled with track grip nearly all day and finished 18th. At the front of the field, Kevin Harvick passed Jimmie Johnson coming off turn four on the final lap to take the victory.

Road ahead: The ugly stats are that Gordon has just one top-10 finish in his last 8 races, and just two top-5 finishes in the last 22 events. However, Martinsville comes at the right time for Gordon. After a victory at Phoenix, Gordon has struggled over the last 3 races. Gordon posted 15 consecutive top-10 finishes at Martinsville before Kurt Busch’s front bumper snapped that streak last fall. 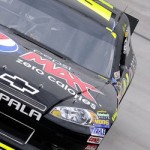 Jeff Gordon started off loose, but the car eventually tightened up as the opening run progressed. He ran 11th when the competition caution waved on lap 50. He ran 13th-15th over the next 100 laps battling a tight handling car in the center of the corners before a caution for Robby Gordon’s wall contact. At the halfway point, Gordon was running in 11th place — but the handling seemed to be improving as he turned the fastest laps just before a caution for Bobby Labonte’s spin. However, chassis adjustments proved to be his underdoing as he dropped to 15th and was in danger of going a lap down. A debris caution on lap 344 allowed Gordon to come to pit road for adjustments. He failed to make in-roads toward the top-10 over the last 150 laps and finished 14th. He remained 19th in the series standings, but would qualify for the Chase (if that became an issue in March!) due to his win at Phoenix.

Road ahead: Gordon has just one top-10 finish in his last 7 races, and just two top-5 finishes in the last 21 events. The series heads to the 2-mile speedway in Fontana, California, for Sunday’s race. Crew chief Alan Gustafson led Mark Martin to three straight top-6 finishes there. Jeff Gordon had solid efforts there in 2010, but an engine issue and a pit road penalty hindered his finishing position.

TALK ABOUT YOUR DAY:

“It was more down than up, I think. We had one run where the car was just unbelievable on the long run and we had a long run and I don’t know how far we drove up there but I drove by a bunch of cars and I was pretty optimistic at that point. And I was still a little bit tight, which is what we’d been fighting in the center of the corner; and we freed it up and was so loose I couldn’t drive it after that. And we just went back and forth and back and forth. We salvaged a 14th place finish out of it, which you can’t complain too much about that. It was definitely not our day so we were frustrated at times and fighting hard but I felt like we worked well together as a team to get through kind of a rough day and come out here with a decent finish.”

HOW DID THE TIRE TREAT YOU?

YOU’RE NOT VERY HAPPY WITH BRAD KESELOWSKI. WHAT HAPPENED?

“The guy was three laps down. I understand. He’s trying to keep from going a lap down and hey, you’ve got to give him credit. They fought back and got back on the lead lap and got a decent finish out of it. I’ll just tell Brad that the next time I’m three laps down, and he’s on the lead lap, just expect the same out of me, you know? I don’t expect him to just let off. He had a fast race car. But when you’re three laps down and then you door-slam the guy trying to pass; that’s what ticked me off is when he got loose underneath me and got up into me, I got pretty mad then.” 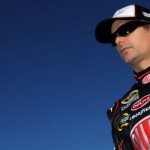 Dale Earnhardt Jr. was once again the center of attention in the Nascar universe last week. He won the pole for the Daytona 500 before a wreck during practice pushed him to the back of the pack to start the race. It was the 10th anniversary of his father’s death, which occurred in a crash on the final lap of Daytona. A moment of silence was planned for lap three of this year’s race as spectators held three fingers in the air for the late driver of the No. 3 Chevrolet.

On race day Junior ran near the front of the pack and was in the top five with only laps to go before a blown tire ruined his chances, sinking him to 24th place. It marked the 94th straight race for Earnhardt without a trip to victory lane. Despite his lowly finish, Earnhardt was the most mentioned driver on the Fox telecast with 91 mentions, compared to 86 for winner Trevor Bayne, according to Joyce Julius & Associates.

Such is life for Nascar’s most popular driver eight years running and the scion of the seven-time Sprint Cup champ known as the Intimidator. Despite his lack of success in recent years on the track, Dale Earnhardt Jr. remains Nascar’s highest-paid driver, earning $29 million in 2010.

Earnhardt moved to Hendrick Motorsports for the 2008 season with great expectations. Despite partnering with Nascar’s richest team, Earnhardt has only one win to show for his three years in the No. 88 car. He remains Nascar’s highest-paid driver thanks to merchandise sales that are the best in the sport and reportedly account for one-third of all Nascar licensed merchandise sales.

Other income streams include an eight-figure annual salary from Hendrick and a 50% share of his $4.9 million in winnings and bonuses in 2010 from Sprint Cup races. Earnhardt also has a bevy of personal endorsements, including Chevrolet, Nationwide and Wrangler.

Hendrick teammate Jeff Gordon follows Earnhardt in the Nascar money standings with earnings of $25 million last year. DuPont, which has sponsored Gordon’s car for 18 years, cut back its commitment this year to 14 races, but the AARP Foundation picked up 22 races to promote its Drive to End Hunger campaign. Gordon partner Pepsi will be the primary sponsor for two races for the No. 24 car. Gordon has racked up $117 million in race winnings during his career.

It is a clean sweep for Hendrick at the top with five-time Sprint Cup champion Jimmie Johnson, the third-highest-paid driver at $24 million. In its collecting of high-priced talent, Hendrick is like the New York Yankees of Nascar. 2010 is the third year in a row that the team has boasted the three highest-paid drivers in the sport. Furthermore, Kasey Kahne, No. 8 on our highest-paid list, will join the squad next year, replacing 52-year old Mark Martin in the No. 5 car.

Johnson signed a six-year contract extension with Hendrick at the end of 2009 that puts his driver’s salary on par with Gordon and Earnhardt. Johnson can’t match his teammates personal endorsements yet, but his profile has been raised with his on-track success and last year’s 24/7 Jimmie Johnson, a four-part HBO documentary.

Johnson counts Lowe’s and Gatorade as personal sponsors, and more deals are likely to follow this year. His dominating performance is starting to resonate with Nascar fans as his merchandise outsold every other driver save Earnhardt’s last year. Johnson raked in $13.4 million in winnings and bonuses last year, but that money is shared with the owners of the No. 48 car, who include Hendrick and Gordon.

While salaries at the top appear stable, the next tier of drivers might be headed for a haircut as primary sponsorship deals continue to get done at lower rates across Nascar. “As drivers get into renegotiations, salaries will be impacted and could be down 20% to 25%,” says Zak Brown, chief executive of Just Marketing International, a motor sports marketing company in Zionsville, Ind. As of now eight Sprint Cup drivers will be free agents after this year. 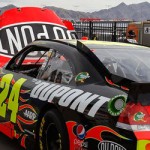 Rewind: A cut tire on lap 194 sent Jeff Gordon into the wall in turn two while he was running 10th. Gordon brought the damaged DuPont Chevrolet onto pit road and climbed out. Gordon started 13th and stayed out during the first caution period to lead a lap. He dropped to the lower half of the top-10 after the restart battling a tight handling car. A long green flag run dropped him to 10th before a cycle of green flag pit stops on lap 51. A caution for Kyle Busch’s cut tire brought the field to pit road on lap 97. Gordon exited pit road in 6th place and held the spot through two quick caution periods. In the mid-stages of the event, Gordon ran 8th-10th before a pit stop on lap 150 dropped him to 11th. The cut tire came without warning and put an early end to his day.

Road ahead: Through practice and the race, the #24 team battled handling issues. The car was far from dominant when compared to 2010. However, crew chief Alan Gustafson clearly made strides as the race progressed. A week off awaits before the series heads to Bristol Motor Speedway for the first short track race of the year. Gordon will drive the Pepsi Max car at Bristol — the first time he’s driven a Pepsi car at a track less than 1.5-miles long.

JG’s comments: “There was no sign (of the cut tire). We needed to free it up. Nothing we were doing seemed to be helping. The day started off pretty good, we were up toward the front. We started losing the handling on the last couple of runs. I’m glad I had a safer barrier to hit and a safe race car.”