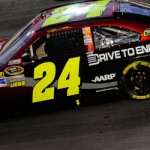 On a night where Jeff Gordon dominated at Bristol Motor Speedway, he came up empty in the final rundown as Brad Keselowski won a late race off pit road to take the lead. Gordon, who led more than 200 laps, fell to 5th for the final restart. He regrouped to finish 3rd, but was distantly behind Keselowski at the finish. Gordon led more than 60 laps at Bristol for the first time since August 2003 — a span of 16 races. In addition, he led more laps than he had in the previous 9 Bristol races combined.

Gordon started 4th and jumped to 3rd by the end of the first lap. He took the runner-up spot from Carl Edwards one lap later. Gordon took the race lead from Ryan Newman on lap 6. He led the race until the first caution flag for debris on lap 31. He came to pit road while others stayed out. As such, he restarted in 14th place. Gordon worked in race traffic and moved back into the top-10 on lap 60. He took 8th from Kevin Harvick on lap 65 and moved up to 6th by the 100-lap mark. A debris caution on lap 102 brought the leaders to pit road. He restarted 6th on lap 110 and quickly entered the top-5. Gordon took third place from Edwards on lap 116. He took the runner-up spot from Brad Keselowski on lap 124 and closed in on Jimmie Johnson for the race lead before a caution on lap 129. Gordon lined up along side Johnson for the restart on lap 138, but was unable to make headway to re-take the race lead while battling a loose handling condition. Gordon bided his time and passed Johnson for the lead on lap 183.

Gordon came to pit road on lap 239 for a green flag stop. He dropped to 2nd behind Matt Kenseth following the pit stop cycle, but eventally took the lead once again on lap 267. David Reutimann’s crash on lap 297 brought the leaders to pit road. Gordon exited in 2nd place behind Kenseth, but re-took the race lead on lap 326. Mark Martin’s wreck on lap 360 brought a caution flag pit stop sequence. Once again, Kenseth beat Gordon off pit road to take the lead. Gordon worked around Kenseth to re-take the lead on lap 372. A caution for Kyle Busch’s wall contact brought the field to pit road. Gordon dropped to 5th off pit road and was hindered by the inside line. He worked his way around Johnson with 62 to go, and took 3rd from Kenseth one lap later. Gordon is now tied with Kevin Harvick for 5th in the series standings — though the points will be resent following the Richmond race.

Road ahead: With just two races before the Chase for the Championship, the series heads to Atlanta Motor Speedway for Sunday night’s 500-mile race. The Atlanta race provides the #24 team with an opportunity to fine-tune their intermediate track program since Atlanta has similar characteristics to Charlotte Motor Speedway and Texas Motor Speedway (Chase tracks).

Up Close at Bristol 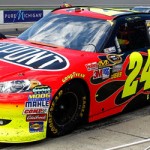 Kyle Busch posted his fourth victory of the 2011 season with a victory in the Pure Michigan 400 at Michigan Speedway. Busch led 22 laps and held off Jimmie Johnson on a green/white/checkered restart to score the 23rd victory of his Cup series career.

Jeff Gordon started 9th but dropped positions right after the green flag waved. He regrouped to work back up to 9th by lap 10, and was running 6th at the first caution flag on lap 29. After the restart, Gordon moved into the top-5. At lap 52, Gordon took 3rd place and made in-roads on the Roush Racing leaders of Greg Biffle and Matt Kenseth. After a caution flag for Bobby Labonte’s spin, Gordon lost position on the ensuing restart. He regrouped and took 5th from Kyle Busch on lap 62. However, overcast skies and wind impacted the handling on the DuPont Chevrolet. Busch re-took the spot from Gordon as he remained in the top-10. A caution at the halfway point brought the field to pit road.

After taking two tires, Gordon moved to 2nd place on lap 110. Three laps later, Gordon took the race lead from Matt Kenseth. He led for 11 laps before Kenseth re-took the lead when Gordon’s water temperature increased due to trash on the front of the car. Gordon ditched the debris by bump-drafting Kenseth and then regained the top spot. He came to pit road for a green flag pit stop on lap 138. Gordon slipped to 2nd after the round of stops. Two laps later he fell to 3rd when Busch went by. As the tires came up to pressure, Gordon passed Busch and Kenseth to take the lead. Final pit stops came under caution with Gordon leaving pit road behind Matt Kenseth. He dropped to 5th on the restart with 25 laps to go while battling a tight handling condition. Mark Martin sent Gordon back to 6th with 12 laps to go. A caution for Kurt Busch’s wall contact set up a green/white/checkered finish. Gordon held on to post a 6th place finish — his third top-6 finish in the last four races.

Road ahead: The annual night race at Bristol Motor Speedway is next on the docket. Before that, Gordon is scheduled for a mid-week test session at Pikes Peak International Raceway in Colorado. 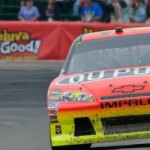 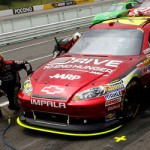 Jeff Gordon made the biggest move through the field at Pocono Raceway after starting 31st and finishing in the 6th position. However, it was due to his starting spot — and lack of track position during the event — that hindered him from challenging for the victory.

After contact with the turn 2 wall in qualifying, Gordon started in 31st place. He was unable to make significant headway in the opening stages and ran 28th when the first caution waved for Kyle Busch’s spin on lap 13. After a pit stop, he moved up to 25th on lap 19 before David Ragan’s spin in turn three. Gordon held the low line and easily avoided Ragan’s spinning car. He stayed on the track during the caution and moved up to 21st for the restart. However, he struggled with handling and dropped to 26th by lap 25. Following a green flag stop on lap 41, Gordon advanced to the 22nd position. Twenty laps later, he moved up to 18th and held the spot through a round of green flag pit stops. Gordon ran in 17th place on lap 70 and took over 15th on lap 72. Another cycle of green flag stops occurred about 15 laps before the halfway point. Gordon ran in 13th place after the round of stops. A timed debris caution at lap 100 brought the field to pit road. Gordon restarted 13th and moved into the top-10 on lap 108. He took 8th from Brad Keselowski on lap 112, and ran in 6th on lap 119 when he passed Clint Bowyer. A caution for rain came on lap 123 and was followed by a red flag period for nearly two hours.

The skies cleared and track drying began around 3:30pm. Shortly after 5pm, the drivers strapped back into their cars to complete the event. Pit stops followed after the red flag was lifted and Gordon restarted in 7th place on lap 131. With 48 laps to go, Gordon came to pit road for a four-tire change. He cycled through the sequence in 7th place. He took 6th place from Joey Logano with 36 to go. Gordon’s final pit stop came with 27 laps to go. A caution flag for Juan Pablo Montoya’s spin with 21 laps to go slowed the field and brought Gordon closer to the leaders. He stayed out during the caution and restarted in 5th place. Ryan Newman passed Gordon for 5th with 13 to go. Gordon remained 7th in the series standings after posting his 7th top-10 finish in the last 9 races.

Road ahead: The series visits the Watkins Glen International road course in upstate New York. Since his last victory at The Glen in 2001, he has struggled on the 2.4-mile course. In the last 9 races there, his highest finish in 9th — with 5 finishes of 21st or worse.