Jeff Gordon posted his fifth top-6 finish in the last six races with a 5th place effort in the Brickyard 400. However, after running 2nd to eventual race winner Jimmie Johnson during the mid-stages, Gordon fell to 7th following the final pit stop. He’ll need at least two victories in the next 6 races to qualify for the Chase for the Championship.

Gordon started 9th and moved to 7th by the end of the second lap. He moved to 6th with a pass on Joey Logano on lap 5. However, he complained of a tight handling condition entering the turns and dropped 5 seconds behind race leader Denny Hamlin. He moved to 5th on lap 12 when Carl Edwards slowed with an engine problem, and took 4th from Greg Biffle on lap 19. Gordon came to pit road for a four-tire change on lap 29 and returned to the race in 4th. The first caution waved on lap 40 when Travis Kvapil cut a tire and hit the wall. Gordon opted for two tires, but lost three positions on pit road and restarted 7th on lap 44. Gordon moved up to 5th before the next caution on lap 47 for Clint Bowyer’s spin into the infield grass. He took 4th from Dale Earnhardt Jr on lap 60, and moved to 3rd when Brad Keselowski came to pit road. Three laps later he took the runner-up spot from Greg Biffle.

Gordon closed in on race leader Jimmie Johnson and led 1 lap during a green flag pit stop sequence on lap 74. Following stops, he ran 3rd behind Keselowski and Johnson. Gordon again moved to 2nd on lap 90 following Keselowski’s pit stop. A caution for Casey Mears’ wall contact slowed the field on lap 94. Following pit stops, Gordon restarted in 5th on lap 99. He moved to 3rd shortly after the restart by passing Keselowski and Regan Smith. Gordon took 2nd from Kyle Busch on lap 110, but was more than 3 seconds behind Johnson for the race lead. A caution on lap 124 for Jeff Burton’s tire issue brought the leaders to pit road. Gordon lost four spots on pit road and restarted in 6th place. He dropped to 7th before getting around Ryan Newman with 29 to go. A caution with 28 laps to go slowed the field when Joey Logano spun and collected Matt Kenseth. On the restart with 20 laps to go, Gordon dropped to 8th as Newman and Martin Truex went by. However, he rebounded to pass Truex and Newman in the closing stages to take 5th place.

Turning point
Gordon was running in 2nd when the caution waved on lap 124. A brief problem on the right front caused Gordon to leave pit road in 6th place, thus removing any chance at a possible victory.

JG’s comments
“We had a car that could compete for the win. I think we were one of the only ones who could compete with the 48. Congratulations to Jimmie and Chad, and the whole Lowe’s team and Rick Hendrick. They’re that good and they deserved to be in Victory Lane today. They were the best team and they had a fast race car. We had as good of a race car if not better. We just could never get the track position, and when we did it was so hard to pass. Our car was awesome. We lost some track position and then the restarts I was starting on the outside both times — that definitely didn’t do us any favors. It was hard to pass. I can’t complain about it too much, just would’ve liked to have been up there battling with Jimmie, at least make it a little harder on him. My gosh, he had it pretty easy there at the end.”

ON HIS RACE:
“I don’t think we could have passed him (Jimmie Johnson). Those guys were definitely the class of the field today and had the track position. They’re a strong team. They deserve that win today. They did everything. Jimmie did his job on the track and the team did their job in the pits. And they had a good car.”

YOU CAME HERE TO WIN, BUT IS THERE ANY SATISFACTION IN FINISHING 5TH?

“I’m pretty disappointed really. It’s always nice to finish in the top five but at this point in the season, the way our season has gone with so many missed opportunities that we’ve had, I feel like it was a little bit of a missed opportunity today. We needed track position there at the end and we didn’t get it when it counted most and it cost us.”

TALK ABOUT THAT LAST PIT STOP. WAS THERE ANYTHING SPECIFICALLY THAT HAPPENED OR WAS IT JUST SLOW?

“I have no idea. I have to review it. The one thing about this pit road is that if you get a little bit behind, once you get up here, you’re way behind because they pull out in front of you and the next one pulls out in front of you and that’s what happened. We lost more than we should have but that wasn’t so bad. The worst thing was when you start on the outside lane; my car would just not go on that outside lane. And then they got all jumbled up and we lost even more spots. And then we had another caution on the outside lane again, so it just wasn’t our day.”

“I give them a lot of credit. It’s really awesome that they’re out front. They’ve been consistent and if they can keep that consistency up and maybe even take it up a notch when the Chase starts, they’re going to be a real threat for the championship. So, they’re running good. It’s good to see it. I’m happy to see it for Junior. I’m really happy to see it for (crew chief) Stevie (Letarte) and that whole team. They’ve put a lot of effort into it.”

WHERE DO YOU RANK YOUR CAR?

“I thought we were as good as or better than Jimmie (Johnson). We just never could get in front of him. That’s what it takes to win. You’ve got to get out front. Track position is very important here. We showed that we could run their pace, but we were always coming from behind.”

WHEN YOU FIRST MET JIMMIE JOHNSON, DID YOU THINK HE WOULD BE THIS GOOD?

“I knew he was special and talented. The type of equipment he was in [Herzog Motorsports] was not the best equipment out there. It was good equipment, but not the best. I knew if you took a guy who had worked that hard and has raced that long with his talents, and put him with a good team, that he’d be able to do something special. I had no idea he was going to do what he has done, that’s way beyond any of our imagination, including his. He’s a great guy and a great driver. He has a great team. They deserve it.”

YOU MADE UP A LOT OF SPOTS IN THE LAST HANDFUL OF LAPS. DO YOU THINK IF YOU HAD A RESTART A LITTLE CLOSER TO THE FRONT, THAT YOU WOULD HAVE AT LEAST FINISHED 2ND?

“I think we were a second-place car really, all day. We could pass everybody but Jimmie. That clean are is really important. So, yeah I think we were good enough to be second, but we weren’t going to pass Jimmie under green flag conditions.”

“I happy with the car. Other than the first run, I was happy with the car all day. Or, maybe the second run. We were a little bit too tight. We freed it up and from that point on, I thought we had the car to beat. We just never could never quite get that track position and get close enough to that No. 48 to try to make a pass on him. But it was a good solid day for us. You know I love this place.” 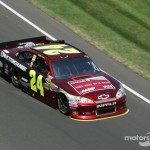 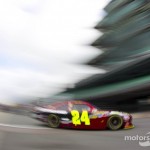 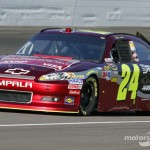 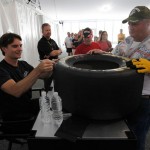 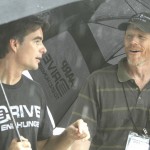 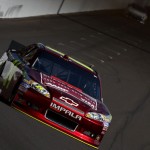 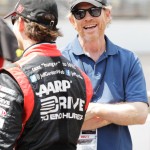 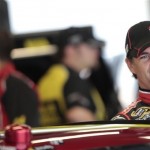 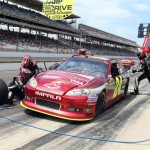 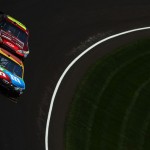 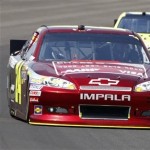