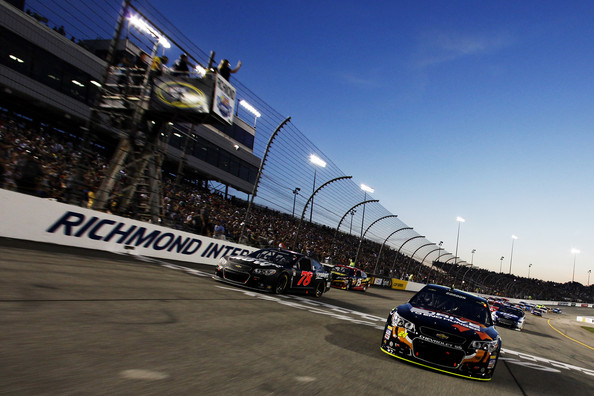 Two points. That’s what separated Jeff Gordon from the NASCAR Chase after 26 races this season. Gordon finished 8th at Richmond International Raceway and missed the Chase cutoff for just the 2nd time in the 10-year history of the Chase. Gordon was in position to make the Chase in the closing stages. However, a spin by Clint Bowyer (ironically) changed the complexion of the event.

Gordon started on the pole and led the first 49 laps before Brad Keselowski took the lead away. Kurt Busch followed Keselowski past Gordon, which dropped him to 3rd place on lap 51. He fell to 5th on lap 61 when Jamie McMurray and Clint Bowyer went by. He faded to 8th place by lap 75 after wearing out the right rear tire. Gordon fell out of the top-10 on lap 86 when Kasey Kahne moved ahead. Gordon came to pit road on lap 94 for a green flag stop. He cycled through in 12th place and ran there at lap 100. Gordon moved to 11th by passing Kasey Kahne on lap 123. The first caution waved on lap 135 which brought the field to pit road for adjustments. Gordon gained 3 spots on pit road because of the first pit stall and restarted in 8th place.

Gordon held 8th until lap 177 when Greg Biffle and Aric Almirola went by to send him back to 10th. As the handling went away, Gordon fell to 15th on lap 186. A caution for David Stremme’s spin on lap 208 brought out the caution. Gordon restarted in 16th place after adjustments on pit road. On lap 224, Gordon dropped off the pace and came to pit road after reporting a vibration — which turned out to be a loose right front wheel. The crew changed four tires and Gordon returned to the track two laps down in 25th position. He tracked down and passed Brad Keselowski to put himself one lap down on lap 231. On fresher tires he was able to gain spots on the drivers one lap down and ran 23rd on lap 255. Seven laps later, Gordon passed Brian Vickers to move into 22nd place — the free pass position if a caution waved. A debris caution on lap 264 allowed Gordon to get back on the lead lap to put himself in position to qualify for the Chase.

Gordon restarted 22nd on lap 274 and entered the top-20 soonafter. He took 19th place from Denny Hamlin on lap 292 and moved to 18th around Almirola 10 laps later. Gordon moved to 16th with 87 laps to go. With Joey Logano trapped 2 laps down, Gordon essentially needed a top-10 finish to qualify for the Chase at that stage of the event. He took 15th from Matt Kenseth with 75 laps to go, and took 14th from Martin Truex two laps later. Gordon came to pit road with 58 laps to go, just before Jimmie Johnson cut a tire to bring out the caution flag. He rolled through pit road and was the first car one lap down, which allowed him to get back on the lead lap. Gordon restarted in 12th place with 50 laps to go. He entered the top-10 with a move around Mark Martin, and took 9th from Ricky Stenhouse with 35 to go. He took 8th from Kenseth with 30 to go, which gave him a 2 point edge for the 10th and final Chase cutoff. Clint Bowyer’s spin with 8 laps to go brought out the caution. Gordon had a difficult time gaining spots on the restart and finished the event in 8th place. However, Joey Logano advanced from 25th to 22nd after the final caution allowing him to edge Gordon for the final Chase spot.

JG’s comments
“It’s unfortunate. We haven’t had the kind of year that this team is capable of. That’s where our focus is the next 10 races is just to know that we put in every bit of effort we possibly could. We fought through a lot of things. It wasn’t pretty but we were getting it done until that caution came out. We still could have made it in. That restart didn’t go the way we needed. So, that’s unfortunate. Yeah, it’s tough. I’m just bummed for this team. They work so hard and I don’t know why we’ve had the kind of rough year that we’ve had. We’re going to do everything we can to go to these next 10 races and step it up to get ourselves in position to be more competitive. Hopefully we can win a race or two and get ourselves in position to be in a better position when it comes to Richmond at this time next year.”

“I don’t know what it is about this track lately with me and this raceteam. We started off so great. We’ve done this before. And then all of a sudden we started fading. I was getting pretty frustrated at that time because it was that kind of condition where you’re real tight landing and real loose off and I was like, ‘How do we fix this? I don’t know how to drive it any different. I don’t know what to tell them.’ But they did an awesome job. We stayed calm. We got a lap down, had a loose wheel, we had all these things thrown at us and yet we came back and finished 8th. I’m blown away that we finished 8th. I think that’s a testament to this race team and the fight we have in us. It was fun to fight back like that. I wish we could have gotten a couple more.” 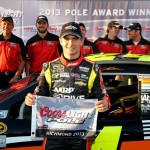 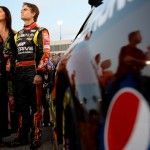 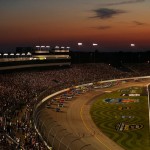 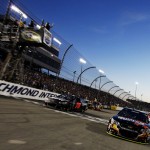 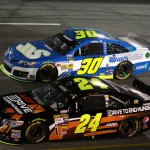 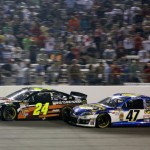