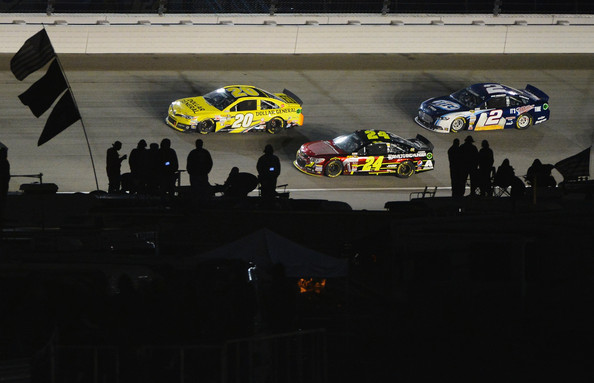 Jeff Gordon posted a hard fought 6th place finish in the day/night Geico 400 at Chicagoland Speedway. Gordon led 22 laps and seemed destined for a solid top-5 finish to start the Chase. However, a flat tire on lap 173 brought Gordon to pit road under the green flag. He lost a lap and his chances for a Chase-opening victory were dashed. He was able to get back on the lead lap with less than 40 laps to go and salvaged a 6th place finish. Gordon moved up to 7th in the series standings, trailing points leader Matt Kenseth by 24.

After rain showers delayed the start by more than an hour, Gordon started 6th and dropped to 8th within a lap of the green flag. He held the spot until taking 7th from Kasey Kahne just before the competition caution on lap 30. He restarted in 11th place after opting for 4 tires. Gordon re-entered the top-10 on lap 39 with a pass on Greg Biffle, and took 9th from Martin Truex on lap 49. As the run progressed he took 8th from Ricky Stenhouse and moved around Aric Almirola to run 7th on lap 57. Gordon moved around Dale Earnhardt Jr for 6th on lap 60. He led 2 laps during a green flag pit stop sequence and cycled through in 6th place. Just 25 laps before the halfway point, rain arrived and brought out the caution flag. After more than 5 hours of rain and track drying, NASCAR restarted the event at 9pm/central time.

Pit stops came prior to the green flag and Gordon restarted in 11th place. He advanced to 10th before a debris caution on lap 122. Gordon used the outside line on the restart to move up to 7th by lap 130. He took 6th from Kasey Kahne on lap 134 and entered the top-5 by moving around Brian Vickers on lap 139. Two laps later he took 4th from Aric Almirola. The next caution waved on lap 147 for Justin Allgaier’s spin. Gordon changed two tires and emerged from pit road with the lead. He led the race until lap 167 when a debris caution brought the leaders to pit road. Kyle Busch beat Gordon off pit road after both opted for fuel-only stops. Gordon restarted 3rd after Biffle stayed out to assume the lead.

On the restart, Gordon slowed dramatically and came to pit road with a flat left rear tire. Two laps later the caution waved for Joey Logano’s engine. Gordon came to pit road for 4 tires and restarted in 33rd place, one lap down. He quickly got himself into the free pass position. However, race leader Kyle Busch began lapping the tail end of the lead lap, which made it more difficult for Gordon to get back on the lead lap. With 50 laps to go, the lead lap cars began coming to pit road for green flag stops. Gordon was able to stretch his fuel longer because of the pit stop earlier for the flat tire. With 43 laps to go, Gordon re-assumed the race lead because of the pit sequence. Gordon received a tremendous break when Dale Earnhardt Jr’s engine blew to bring out the caution flag.

Gordon came to pit road for tires and restarted in 18th place. He moved to 15th with 34 laps to go, and took 12th from Denny Hamlin one lap later. He re-entered the top-10 with a pass on Clint Bowyer with 29 to go. Allgaier’s second spin of the night brought out the caution with 28 to go. Gordon stayed on the track and restarted in 7th place. He took 6th place from Ricky Stenhouse with 18 to go and challenged Jimmie Johnson for 5th place before settling for 6th place at the finish.

Turning point
After a flat tire took him off the lead lap, Gordon was stretching his fuel hoping for a caution with less than 45 laps to go. Dale Earnhardt Jr’s engine brought out the caution that Gordon needed for a shot at a solid finish.

JG’s comments
“That was an incredible accomplishment. It just shows how much fight this team has in them. They never give up. What an awesome [car] we had tonight. That was so much fun. To think how far down we were with 40 laps to go. We were like 18th on one of those last restarts. To be able to come up through there, get 6th, and have a shot at a top-5 is a lot of fun. That’s what we needed to get this thing started off right. I’m proud of this team and can’t wait to get to the next race.” 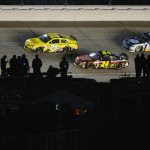 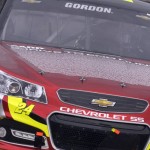 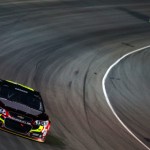 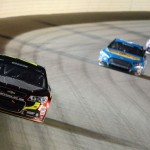 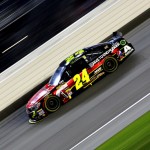 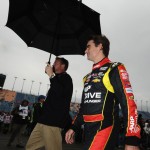 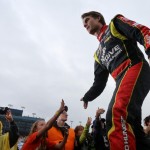 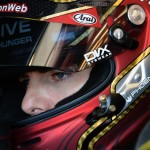 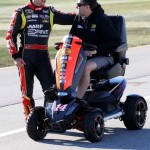