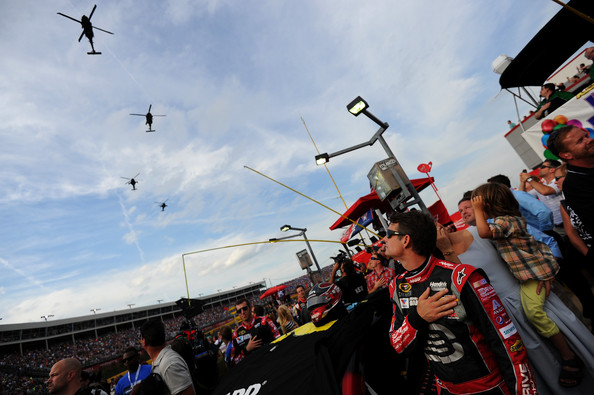 Jeff Gordon finished a hard fought 7th in the Coca-Cola 600 at Charlotte Motor Speedway. Gordon battled back spasms in the days prior to the race and had Regan Smith standing by in case a relief driver was needed. Smith never put on his uniform as Gordon completed all 600 miles — and nearly scored his 90th career win in the process.

Gordon started 27th and moved into the top-20 within 10 laps. He entered the top-15 with a pass on Justin Allgaier on lap 27. Gordon moved up to 11th prior to a round of green flag pit stops on lap 48. Gordon Cycled through in 12th place. He entered the top-10 on lap 60 with a pass on Denny Hamlin. By lap 80, Gordon had advanced to 8th place as the #24 car exceled on the longer run. He came to pit road for tires and fuel on lap 92 and cycled through in 7th place. The first caution waved on lap 109 and brought pit stops. Gordon restarted 6th on lap 114 and took 5th from Dale Earnhardt Jr on lap 115. He took 4th from Matt Kenseth on lap 117. A debris caution on lap 149 brought the leaders to pit road. Gordon slipped to 6th place on lap 155 before a caution for David Gilliland’s cut tire and wall contact. Gordon restarted 8th on lap 168 after opting for four tires. He worked race traffic and moved into the top-5 on lap 183. One lap later he took 4th from Brian Vickers. Earnhardt Jr then passed Gordon on lap 195 for position. At the halfway point, Gordon ran in 5th place.

Gordon took 4th from Brad Keselowski on lap 205 and moved to 3rd around Earnhardt Jr on lap 210. Gordon led a lap during a green flag pit stop sequence on lap 213. Following stops, Gordon ran in 4th place. A debris caution on lap 222 slowed the field. He came to pit road and restarted in 10th place on lap 227. He advanced to 9th prior to a caution on lap 235 for Marcos Ambrose’s spin. Gordon took 8th from Kyle Busch on lap 246 and moved to 7th on lap 250. As the run progressed, he took 6th from Joey Logano on lap 257 and re-entered the top 5 on lap 261. He passed Jimmie Johnson for position and moved to the runner-up spot on lap 272. A caution for Kurt Busch slowed the field on lap 274. Gordon pitted for tires and restarted 3rd on lap 280. However, he slipped to 5th after the restart as Logano and Martin Truex went by. The next caution waved at lap 285 for Danica Patrick’s blown engine. At the 300-lap mark, Gordon ran in 7th place. He took 6th from Kyle Busch on lap 314 and moved to 5th by lap 320. Gordon came to pit road for green flag stop on lap 330.

Gordon cycled through in 3rd place and began closing on race leaders Jimmie Johnson and Matt Kenseth with less than 50 laps to go. He came to pit road for a green flag stop with 25 to go. The crew changed two tires and Gordon emerged from the pit sequence ahead of Johnson and Kenseth on the track. Alex Bowman’s cut tire slowed the field with 21 to go. Gordon inherited the lead when Carl Edwards came to pit road for tires and fuel. On the restart with 17 to go, Kenseth got momentum on the outside line and took the race lead. Johnson took 2nd from Gordon with 15 to go. Edwards and Harvick moved around Gordon with 12 to go and McMurray pushed him back to 6th with 10 to go. As the laps wound down, the two tires hindered Gordon and he dropped to 7th by the checkered flag.

Turning point
A late two-tire change gave Gordon a chance to win the race. However, a caution flag allowed Kenseth to restart alongside Gordon with four tires.

JG’s comments
The procedures and the different work in therapy that I did helped. There’s quite a few people who were tending to me and I appreciate every one of them. I don’t think I would have gotten through this long race. It was tough. I was aching in there. There was one time I got on the brakes and it triggered something. I didn’t know what was going to happen after that. But it settled down. We had such a great race car. I love the call at the end, just like the call that was made when we won the 1st race here (1994). I don’t know if I could have held off Matt, but we were going to give him a heck of a run. The car was pretty good right there. It was just a matter of whether it was going to tighten up over 20-something laps. I got a decent restart, but when Matt got to my outside I got loose. At that point I was a sitting duck. It was a good effort. I’m happy that I got through it. It tells me a lot about what kind of (pain) threshold I have. I just want to show this team the kind of commitment I have to them because of what they’ve shown me this year.” 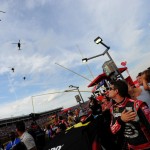 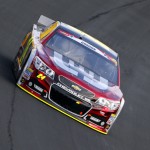 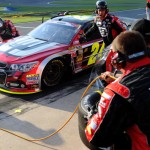