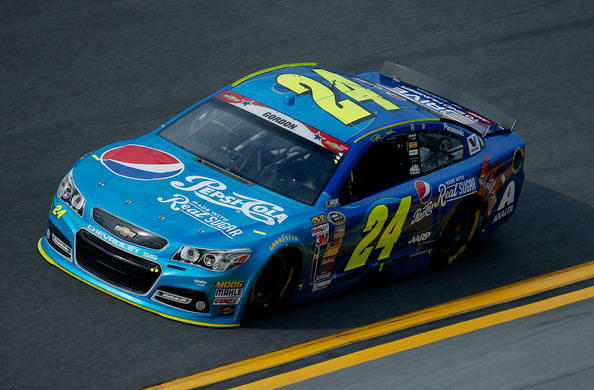 Aric Almirola claimed his first career win in the rain-shortened Coke Zero 400 at Daytona International Speedway. The race was called after 109 laps due to heavy rain. Jeff Gordon finished 12th after evading two major wrecks to claim his 17th top-15 finish in 18 races this year. Gordon maintained the NASCAR points lead by 27 over his Hendrick Motorsports teammate Dale Earnhardt Jr.

Gordon started 9th and ran on the inside line for the first 6 laps before a caution for a rain shower. As heavier rain fell, the field came to pit road for a red flag period. After a 40-minute delay, racing resumed on lap 12. On lap 20, a multi-car incident was triggered when Ricky Stenhouse got loose at the front of the field and Gordon turned down into Tony Stewart’s car.

More than 10 cars sustained heavy damage — including Stewart, Kevin Harvick, Carl Edwards, Dale Earnhardt Jr, Matt Kenseth, Jimmie Johnson, and Kyle Larson. Gordon sustained minor left front damage when he turned into Stewart’s right rear quarterpanel after seeing Stenhouse get loose. He came to pit road several times for fender repairs. Gordon restarted in 31st place on lap 29. A debris caution on lap 40 slowed the field with Gordon in 30th place. He restarted in 32nd on lap 44 and remained in a draft with Ryan Newman approximately 4 seconds behind the lead group. He drafted with Newman up to 24th place on lap 75. He stayed on the track to lead 2 laps during a green flag pit sequence on lap 88. After a 2-tire change, Gordon ran in 16th place on lap 90.

The next caution waved for debris on lap 94. Gordon stayed out and restarted 12th on lap 97. Gordon barely made it through another major wreck on the backstretch that took out more than 20 drivers on lap 98. The wreck was triggered when Greg Biffle bump drafted Kasey Kahne, which turned him sideways into Joey Logano. Gordon sustained some nose damage after getting into the back of David Gilliland during the melee. After repairs on pit road, Gordon restarted in 13th place — with just 16 cars on the lead lap. Gordon dropped to 12th before a caution for rain on lap 108. The red flag waved on lap 112 and the race was called after heavy rain continued in the afternoon.

Turning point
After Stenhouse got loose, Gordon turned down into Stewart. The damage impacted the handling of the Pepsi Chevrolet for the balance of the event. 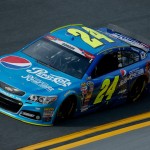 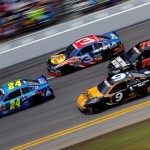 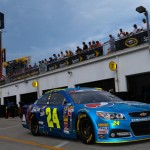