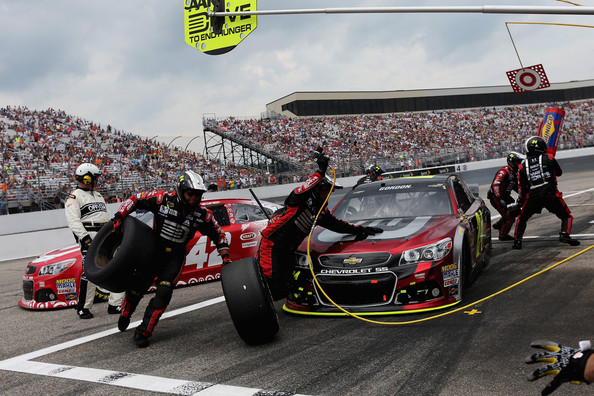 Brad Keselowski dominated the Camping World 301 at New Hampshire Motor Speedway by leading nearly half of the race en route to his second win in the last three weeks. Jeff Gordon finished 26th after an up and down day where he made a late race gamble to make it to the finish on fuel, but came up 3 laps short when the race went into extra time. Nevertheless, he holds a 12 point lead in the NASCAR standings. It snapped his streak of 17 consecutive top-15 finishes at Loudon. Gordon started 11th and moved into the top-10 when Jimmie Johnson cut a tire on lap 8. The first caution waved on lap 13 after Johnson cut another tire and wrecked in turn 1. Gordon advanced to 7th by lap 22, but struggled with tight handling as the run progressed. He dropped to 9th by lap 40 and fell to 10th when Kevin Harvick passed on lap 43. His slide continued as Dale Earnhardt Jr sent him to 11th on lap 46. Gordon lost 3 more spots over the next 10 laps and ran 14th on lap 56. His handling woes dropped him outside the top-20 on lap 60 and he complained the car was “undrivable.” Gordon dropped to 25th prior to a green flag pit stop on lap 75. Following the stop it was determined that Gordon’s right rear tire had developed a slow leak which hindered the car’s handling.

When the pit stop sequence cycled through, Gordon ran a lap down in 26th place. He passed Greg Biffle to take 25th by the 100-lap mark. The second caution waved on lap 112 for phantom debris. Gordon stayed on the track for the wave-around to get back on the lead lap. He restarted in 22nd place on lap 117. Gordon was unable to make headway and ran 22nd at the halfway point of the race. A debris caution on lap 153 allowed Gordon to come to pit road and get on the same pit sequence as the leaders — while also allowing him to get four tires. He re-entered the top-20 after the restart on lap 157 and took 19th from Paul Menard on lap 160. Gordon took 15th from Kurt Busch on lap 171 as his forward march on four tires continued. The next debris caution came at lap 176 and Gordon came to pit road for fresh tires. He restarted in 16th place on lap 180 and worked through race traffic to pick up 3 spots in the next 10 laps. At the 200-lap mark, Gordon ran in 11th place.

He re-entered the top-10 for the first time since the early stages after Joey Logano crashed on lap 211. Gordon opted for two tires and restarted in 3rd place. He got a poor restart on the inside line and dropped to 7th on lap 220. He regrouped and took 6th from Kasey Kahne on lap 225, and entered the top-5 on lap 233. A debris caution with 52 laps to go brought the leaders to pit road for the final time. Gordon stayed on the track and assumed the race lead.

Gordon led until lap 270 when Brad Keselowski took over the top spot. With 20 to go, Denny Hamlin pulled to the outside and took a spot from Gordon. He conserved fuel to try and make it to the finish and backed off on his overall lap times. A caution for Justin Allgaier’s crash with 3 laps to go set up a green/white/checkered finish. Hamlin came to pit road for fuel. Gordon stayed on the track, but ran out of fuel under the caution period. He needed a push from a safety vehicle to get back to pit road for fuel. He remained on the lead lap and finished the race in 26th place.

Turning point
Gordon was running 5th when the caution waved with 52 laps to go. He stayed on the track and inherited the race lead, but had to complete the distance on the edge of his fuel window.

JG’s comments
“The whole race for us was just so up and down and crazy. There at the beginning, we had a leak in the right rear and went a lap down. I could barely hold onto it. I didn’t know what was wrong with it. I just knew it was really hard to drive. I was doing everything I could to keep from wrecking. And we thought we just missed the set-up, but it was that tire. So we made an adjustment that probably over-compensated and we had to come from a lap down. But, the car, once we were able to tune on it and knew what we had, was actually really, really strong. We were able to show that towards the end, which was great. We didn’t have the tires that those guys had, so they were a little bit better than us, but we held them off for a good while there. We were looking good to finish third. I felt very confident we could finish third until that caution came out and then we just ran out under caution.”

WAS IT UNEXPECTED TO RUN OUT OF FUEL?
“We knew we were very close. That pick-up is in the right side and so I was scuffing my tires and think I just took enough fuel out of the pick-up and I could never get any back in there. I tried. I think if we would have gone green, we would have been fine. I think it was really just because under caution it wouldn’t pick-up the amount of fuel that was in there. We might have run out anyway. But, it was the best effort and chance we had at winning this race. And that’s what it’s all about for us in the points. Leading and where we’ve been, it’s all about wins right now. We got to go for it so I thought it was a great call even if we did come up short.”

WHAT DO YOU TAKE AWAY FROM TODAY THAT YOU CAN USE HERE IN SEPTEMBER?
“When the green flag dropped, I thought we were in big trouble. But as it turned out, we had some kind of issue with the right rear tire going do. So, we’ve got to work on it. We weren’t good enough, in my opinion, to win, but we weren’t far off. So that gives us something really good to work with and notes to take back and go over and debrief with our teammates and hopefully come back even stronger.”

DID ANYONE HAVE ANYTHING FOR RACE WINNER, BRAD KESELOWSKI TODAY? THEY SEEM TO BE VERY STRONG.
“Yeah, I don’t know what they’ve got but they’ve got something that’s really good right now and we’re playing catch-up.” 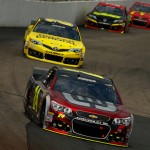 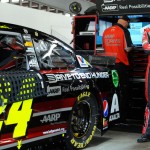 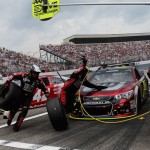