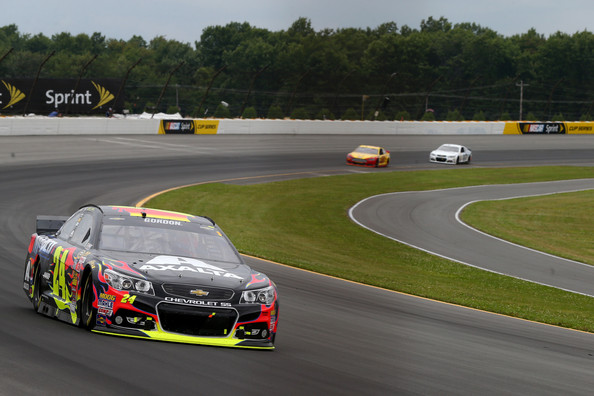 Dale Earnhardt Jr swept both events at Pocono Raceway in 2014 after a late two-tire change put him in position for the victory. Jeff Gordon dominated the event, having led 63 laps. However, a four-tire change for Gordon put him behind Earnhardt Jr in the closing stages. He was unable to make up the deficit and finished 6th. Gordon remains the NASCAR points leader by 17 points over Earnhardt Jr. The finish was the 446th top-10 of Gordon’s Cup series career — tying him with Bobby Allison for the 3rd highest total in NASCAR history. Gordon started 5th and dropped two spots on the opening lap before moving back to 5th on lap 3 as the tires came up to temperature. He took 4th from Kevin Harvick on lap 4. The first caution waved on lap 9 for Jimmie Johnson’s cut tire. On the restart, Gordon took 3rd from Kyle Larson. The next caution came on lap 16 after Danica Patrick drilled the wall following a flat tire. Gordon dropped a spot to Larson on the restart, but regrouped to take back the 3rd spot on lap 22. He took the runner-up spot from Harvick on lap 26 prior to a caution for Landon Cassill’s crash. Gordon came to pit road for 4 tires and restarted in 14th place after several cars stayed on the track. He gained 4 spots on the restart and moved to 9th place on lap 35. At the 100-mile mark, Gordon ran in 7th place.

The next caution waved on lap 112 for Jimmie Johnson’s wall impact. Gordon stayed on the track and remained the lead. On the restart, a major wreck ensued on the backstretch when Denny Hamlin lost control and spun in front of the field. Tony Stewart, Brad Keselowski, Matt Kenseth, AJ Allmendinger, Paul Menard, Brian Vickers, Martin Truex, Aric Almirola, and Justin Allgaier sustained heavy damage. He reached the 24,000 laps led career milestone by leading his 51st lap during the race at Pocono. After a lengthy clean-up following the crash, Gordon led the field to the restart with 34 laps to go. He came to pit road for his final green flag stop with 28 laps to go. A four-tire change put Gordon back onto the track in 8th place due to drivers ahead of him on different fuel and tire strategies.

A caution for AJ Allmendinger’s wall contact brought out the caution with 22 to go. The caution allowed Gordon to close the deficit to the leaders and put him in position for the victory on fresher tires. He restarted on the inside line in 7th place with 17 to go. Gordon dropped back to 9th after Kurt Busch and Jamie McMurray went by. He battled a loose handling condition in the closing stages, but moved to 8th with 11 to go. Gordon entered the top-5 with 8 to go after passing McMurray and Greg Biffle. The caution waved with 7 to go after Kurt Busch hit the wall after cutting a tire. On the restart with 4 to go, Gordon dropped to 6th where he finished the race.

Turning point
A green flag pit stop with 28 laps to go, and a subsequent 4-tire change, put Gordon back in traffic and out of clean air.

JG’s comments
“Those guys had to do the exact opposite strategy of us. I thought Alan and the team did amazing today. We had the dominant car, but you had to have track position. There at the end we didn’t have it. I think if we would have started in the outside lanes, we would have been alright. My restarts weren’t terrible today. They weren’t bad. When we were on the outside, we could really make up some spots. Unfortunately, those last couple of restarts we were on the inside. With Dale Jr getting out in front of us through the pit sequence, there was nothing we could do. He was really good. Whoever got out front — him or me — I think was going to win the race. I’m still really happy with how well our car performed today. That’s encouraging and has my confidence sky high.” 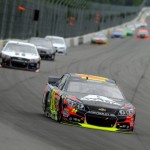 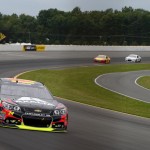 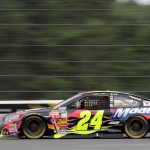