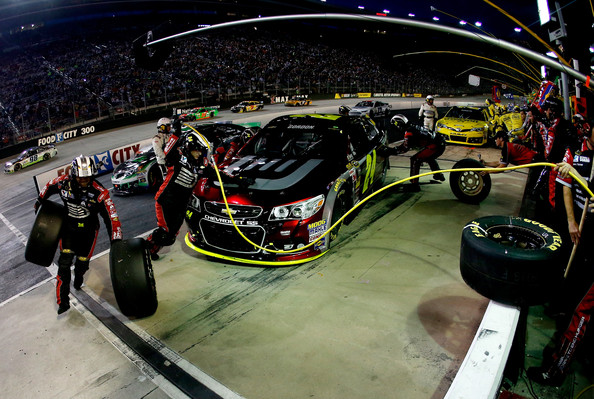 Jeff Gordon struggled with the handling in the mid-stages and his struggles were exacerbated by a pit road mistake. His 16th place finish at Bristol Motor Speedway was his lowest short track finish in the last 9 races. Nevertheless, he remained the NASCAR series points leader (+27) with two races remaining before the Chase begins. Gordon started 2nd and ran behind race leader Kevin Harvick for the opening 36 laps. Gordon took the race lead from Harvick on lap 37 and led until Kyle Busch went by on lap 56. The competition caution on lap 60 brought pit stops. Gordon opted for four tires and restarted in 4th place. He quickly moved to 2nd on the outside line before a caution for Josh Wise’s spin on lap 70. On the next restart, Gordon dropped to 4th after being trapped on the inside line. Kurt Busch got into the left rear of Gordon’s car and pushed the fender in while battling for position. The rear of the car showed tire smoke in the corners for several laps as Gordon held the 4th spot. The next caution came on lap 125 for a wreck involving Aric Almirola, Brian Vickers, and Kyle Busch. Of the drivers involved, only Almirola was unable to continue. Pit stops followed with Gordon restarting in 9th place.

The complexion of the race changed when Harvick tagged Denny Hamlin while battling for the race lead. Hamlin hit the inside wall and came back into the path of Dale Earnhardt Jr, which eliminated both cars. Gordon took 7th from Matt Kenseth on lap 178 prior to the next caution for Michael Annett’s wall contact. Pit stops ensued with Gordon making a mistake by overshooting the pit box. He needed to back up and restarted in 20th place. At the halfway point, Gordon had moved up to 14th place. He passed Greg Biffle and Paul Menard to take 12th place on lap 260. The next caution came on lap 263 for Danica Patrick’s spin courtsey of Alex Bowman’s front bumper. After a four-tire pit stop, Gordon restarted in 18th place. He steadily worked through race traffic and ran 15th on lap 300. However, he was unable to gain spots as the run progressed and held 15th on lap 350. On lap 355, he dropped to 16th place, the last car on the lead lap. He went a lap down on lap 356 prior to a caution for debris on lap 359.

Turning point
A mistake on pit road where Gordon overshot his pit box cost him valuable track position in the mid-stages of the race. He went from the top-10 back to 20th place.

JG’s comments
“The contact didn’t help. I made a mistake I over shot the pit getting in there one time and just stalled. We went from doing a two tire stop to doing a four tire stop. We missed the set-up a little bit tonight. It wasn’t our best night, but we fought hard. I like the fight we put up there. We got back on the lead lap, and proud to finish 16th. It wasn’t our best night.”

EVEN THOUGH IT WASN’T THE BEST FINISH YOU GUYS ARE STILL PRETTY HOT
“Yeah we are. We keep bringing great race cars and race teams to the race track. Right now I’m kind of glad this track is not in the Chase because it was tricky tonight. It was just really challenging. I would hit one good lap and I couldn’t do it for the next 10 laps. Then I would hit another good lap and just the way the rubber was building up in that outside groove it was really challenging. The conditions were a lot different than in practice. Looking back on it I wish I would have worked on a couple of more things in practice and been better tonight.” 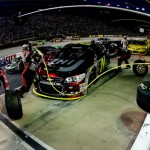 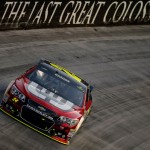 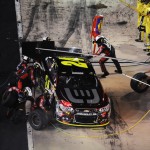