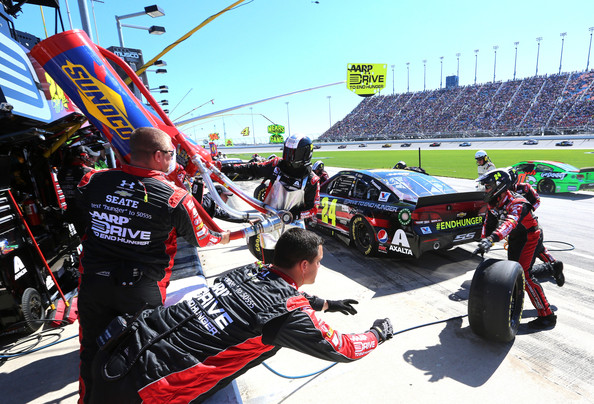 Brad Keselowski began the Chase for the Championship the same way he closed the regular season with a visit to Victory Lane. Keselowski took the lead of the Myafibstory 400 in the late going after Kevin Harvick and Kyle Larson battled for the lead. It was Keselowski’s 15th career win and it moved him into the next round of the Chase. Jeff Gordon posted a runner-up finish after leading in the mid-stages. Gordon started 8th and moved up to 6th by lap 2. He took 5th from Jimmie Johnson on lap 7, and advanced to 3rd by lap 15 with passes on Ryan Newman and Carl Edwards. Gordon took the runner-up spot from Matt Kenseth on lap 16 and set his sights on race leader Kyle Busch. He took the race lead from Busch on lap 28 and led until Jamie McMurray went by on lap 40. Gordon came to pit road for a green flag stop on lap 46. He fell to nearly 2 seconds behind McMurray prior to a debris caution on lap 68. Pit stops followed with Gordon opting for 4 tires and restarting in 7th place. He re-entered the top-5 on lap 76 when McMurray brushed the wall. Gordon’s fresher tires paid dividends as he took the race lead from Kyle Busch on lap 88. The next debris caution came at lap 98 for Ryan Newman’s tire. Pit stops followed with Gordon restarting in 3rd place after a four-tire change.

He took 2nd from McMurray on lap 108, but was unable to close in on race leader Brad Keselowski. Shortly before a round of green flag stops, Kevin Harvick took 2nd place from Gordon. Following green flag stops on lap 149, Gordon ran in 3rd place. A debris caution on lap 182 allowed Gordon to erase more than a 6 second gap to the leader. He restarted in 2nd place alongside Kevin Harvick. On lap 200, Kyle Larson went around Gordon on the outside line to take a spot. He came to pit road for a green flag stop with 38 laps to go. The caution waved with 35 laps to go for Carl Edwards’ cut tire. On the restart, Gordon lined up 3rd behind Larson and Harvick with Keselowski along side. Clint Bowyer’s wall contact with 23 to go slowed the field. The next restart came with 19 laps to go. Keselowski moved ahead of Gordon to take 3rd with 18 to go. Keselowski then took the race lead from Larson and Harvick. A caution for Ricky Stenhouse and Danica Patrick’s contact slowed the field with 9 to go.

On the restart, Gordon moved ahead of Harvick to take 3rd. With 3 to go he moved to the inside to take 2nd from Larson. Gordon posted a runner-up finish — his best start to the Chase since the 2007 season when he also posted a 2nd place finish in the opening race.

Turning point
Gordon ran in the top-4 for the balance of the day. A late race restart allowed him to pass Harvick and Larson for a runner-up finish.

JG’s comments “I was having a pretty good time watching Kyle Larson and Kevin Harvick go at it in front of me. I didn’t know what was going to happen. I thought for sure there was going to be a wreck. But that’s just two guys that are wheeling it. I’m really proud of Kyle Larson. Man, what a great effort; such a young talent. I really wanted to see him win that race because I like him, but I didn’t want to see those other guys win it either. But we had a couple restarts and this car was really solid. The whole team effort was extremely solid. And that’s a great way to get started, especially with restarts like that to come out second. Brad Keselowski is really strong and Joey Logano is really strong in those short runs, and we had them beat I think, prior to that. Kevin (Harvick), well, maybe (Kyle) Larson, too, had us all beat prior to that. But still we were a top three or four all day long so to come in second, I couldn’t be more proud of this team.” 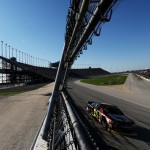 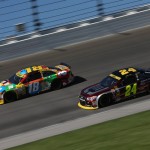 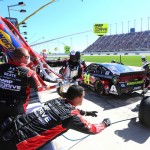