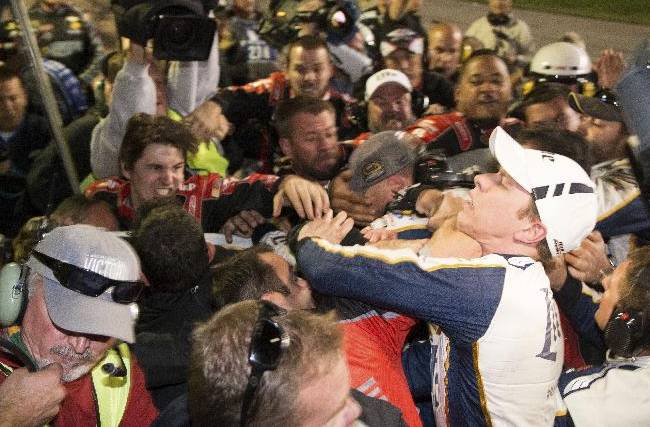 Jeff Gordon seemed to be on his way to a victory at Texas Motor Speedway as the laps wound down. A late caution set up a green/white/checkered restart and created chaos in the NASCAR points standings. Gordon battled Jimmie Johnson for the race lead heading into turn 1. Following contact from Brad Keselowski who attempted to split the Hendrick Motorsports pair, Gordon cut a left rear tire and spun in turn 3. He finished a lap down in 29th place. Gordon has just a 1-point gap to the Chase cutoff with next weekend’s race in Phoenix the final event prior to the Championship Race on November 16. Gordon started on the outside of the front row and remained in 2nd place for the first 30 laps. However, as the run progressed, Gordon battled handling issues and slipped to 4th. A debris caution slowed the field on lap 41. Gordon came to pit road for tires and exited in 10th place after problems on the right front during the stop. He steadily gained spots and ran 7th on lap 70. Gordon re-entered the top-5 with a move around Ryan Newman on lap 83, and took 4th from Matt Kenseth five laps later. Green flag pit stops came on lap 94 with Gordon cycling through in 5th place. He took 4th from Joey Logano just prior to the 100-lap mark, and moved around Kenseth to take 3rd on lap 105. Gordon passed Kevin Harvick for the runner-up spot on lap 136. He took the race lead during a green flag pit stop sequence on lap 139. He cycled through in 3rd place, but re-assumed 2nd after passing Harvick on lap 153. Gordon closed in on race leader Jimmie Johnson prior to a debris caution on lap 175. Gordon held the 2nd spot through pit stops. The next caution waved on lap 205 for Kyle Busch’s tire, with Gordon in 2nd behind Johnson. Gordon exited pit road in 3rd place behind Johnson and Kenseth.

On the restart, Gordon quickly moved around Kenseth to run 2nd behind Johnson. He took the race lead from Johnson on lap 217 prior to a debris caution on lap 223. Gordon restarted in 2nd place after Denny Hamlin opted for 2 tires. He immediately jumped back into the lead heading into turn 1 on the restart. He pulled out to more than a 1-second lead on Johnson before a debris caution on lap 241. Johnson was able to beat Gordon off pit road to take the lead. On the outside line, Gordon fell to 4th after the restart. He regrouped to take 3rd from Kenseth on lap 252 before another debris caution. Gordon restarted 2nd after Brad Keselowski stayed on the track. He tracked down Keselowski and took the race lead with 59 to go. A debris caution brought pit stops with 48 laps to go. Gordon exited pit road in 3rd place behind Johnson and Harvick. A caution for debris with 38 to go brought Gordon to pit road for tires. He restarted in 11th place after several drivers stayed out.

On the restart with 31 to go, Gordon moved to 10th before the next caution for Joey Logano’s flat tire. With 25 to go, Gordon moved up to 6th place and set his sights on the top-5. He took 5th from Kenseth with 23 to go prior to Kasey Kahne’s spin to bring out the caution. Gordon stayed on the track and restarted in 3rd with 17 laps to go. He jumped to 2nd behind Johnson with 16 to go. Kahne wrecked with 14 to go on the backstretch. Gordon lined up on the outside of Johnson for the restart with 9 laps to go. He passed Johnson on the outside coming off turn 2 for the race lead. With 4 laps to go, Clint Bowyer hit the wall to bring out the caution. Gordon chose the outside line for the green/white/checkered restart. Keselowski made contact with Gordon after the restart, which resulted in a cut tire for the #24 car. Gordon spun in turn 3 to bring out the caution. He finished a lap down in 29th place.

Following the race, Gordon exited his car next to Keselowski. He tried to grab Keselowski by his driving uniform, which created a brawl among the pit crews for the #2 and #24 teams.

Turning point Brad Keselowski makes it 3-wide in turn 1 on a green/white/checkered restart. Contact ensued and emotions boiled over.

JG’s comments “We were sitting there on a little bit older tires. I spun the tires a little, but I got a pretty decent restart. We went down into turn 1 and I just wanted to get to the outside of [Jimmie Johnson]. Out of nowhere I just got slammed by [Brad Keselowski]. It cut my left rear tire. He’s just a dipshit. The way he races, I don’t know how he’s ever won a championship. I’m just sick and tired. That’s why everyone is fighting him and running him down. Your emotions are high. That was a huge race for us. We had the car, we had the position. I’m so proud of my team. And I’m proud of Jimmie Johnson for winning that race and not letting that… you know what… win that race.

ON KESELOWSKI: “There wasn’t a conversation. You can’t have a conversation with him. He beats his own drum and gets himself in this position and he’s got to pay the consequences. I’m going to race him the same way he races me. That kind of stuff is just uncalled for and I’m not going to stand for it. To them, I’m sure it’s just a racing incident. But to me, it’s a bunch of crap. The kid is just doing stuff way over his head. To me, that’s just uncalled for. You’re racing for a win and a championship. You don’t go slam somebody and cut their left rear tire. If that’s what it takes, no problem. I can do the same thing back to him.”

WHAT WAS IT THAT UPSET YOU SO MUCH? “We drove down into Turn 1 and he just decided to body slam us and cut our left-rear tire. It ruined our night. It ruined our chances, ruined our night, might of even ruined our Chase hopes. It’s just uncalled for. I had to show my displeasure. It got ugly down there, obviously, and you know that is alright. A lot of things are going to happen in the next couple of weeks.”

IS THIS EMOTION THAT WE ARE SEEING FROM A LOT OF YOU GUYS A RESULT OF THIS NEW CHASE FORMAT? “It’s emotion that is a part of this Chase and this format as well as towards people that make dumb decisions. He has been making a lot of them lately. That is why people have been running after him and chasing him down. It’s why his team has got to defend him over there because of what he does on the race track.”

WHAT HAPPENED AT END OF RACE? “He cut my left rear tire. I went over there to talk to him.”

YOU WEREN’T GOING TO BE DENIED TALKING TO HIM, DID YOU WANT TO SEND A MESSAGE TO HIM? “I wanted to do a lot more than that.”

TALK ABOUT CHALLENGES HEADING TO PHOENIX: “We are just going to take this fire that’s inside of us and this momentum. We are going to take it to Phoenix and win that race.” 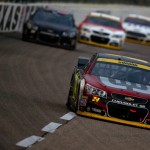 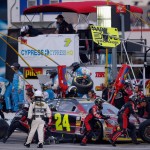 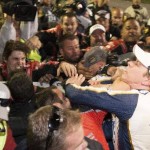 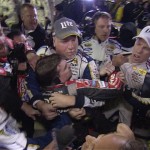 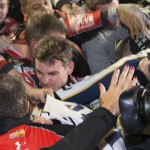 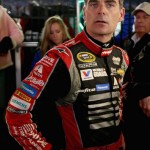