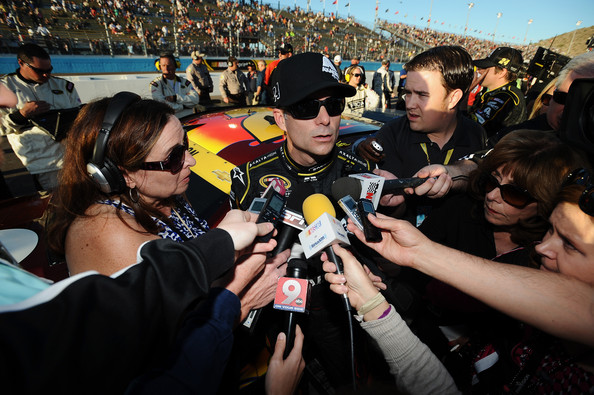 In the end, Jeff Gordon missed advancing to the championship race by a single point. Gordon finished 2nd to Kevin Harvick at Phoenix International Raceway. But it was Ryan Newman’s 11th place finish that eliminated Gordon from title contention this season. Harvick, Newman, Denny Hamlin, and Joey Logano advanced to Homestead-Miami Speedway for the championship race on November 16. Gordon started 7th and slipped back to 9th in the opening laps. He battled handling issues before a debris caution slowed the field on lap 30. Pit stops followed with Gordon exiting in 7th place after a two-tire change. Gordon took 6th from Kyle Busch on lap 49, and tracked down Brad Keselowski to take 5th on lap 63. His forward march continued as he took 4th from Matt Kenseth on lap 70. The next caution waved on lap 80 for Casey Mears’ spin on the backstretch. Gordon came to pit road for two tires and restarted in 3rd place. He dropped to 6th on lap 94 after Kenseth and Keselowski went by. Kyle Busch passed on lap 95 prior to a debris caution. Gordon came to pit road for four tires and a wedge adjustment, and restarted in 20th place on lap 100. He entered the top-15 on lap 112 after moving past Kasey Kahne. He ran 14th when a debris caution slowed the field on lap 123. He restarted in 10th place after a two tire change. Gordon ran 8th on lap 135 after passing Paul Menard and Carl Edwards. At the halfway point, Gordon was in 7th place and closing on Kenseth for the 6th spot.

He moved around Kenseth to take 6th on lap 162 and re-entered the top-5 with a move around Kyle Busch two laps later. He passed Keselowski for 4th on lap 172 as he tried to pad his cushion to the Chase cutoff. A caution for Austin Dillon’s cut tire on lap 183 brought pit stops. Gordon lost 2 spots on pit road and restarted in 6th place. He passed Truex for 5th prior to a debris caution on lap 200. Gordon dropped to 8th on the restart before Josh Wise’s crash brought a caution on lap 206. On the restart, Kyle Busch got loose and collected Clint Bowyer and Cole Whitt to bring out a caution. Gordon restarted in 7th place on lap 220. He re-entered the top-5 after passing Ryan Newman and Kurt Busch. With 78 to go, Jimmie Johnson slammed the wall to bring out a caution. Gordon took 2 tires and restarted on the inside of the front row along side race leader Kevin Harvick. Jamie McMurray’s spin one lap after the restart brought out a caution. Gordon once again restarted inside of Harvick. He dropped more than 5 seconds behind Harvick, but held 2nd place until a debris caution with 25 laps to go.

Gordon stayed on the track and once again restarted inside of Harvick with 21 to go. Landon Cassill’s spin with 16 to go slowed the field with Gordon holding 2nd place. On the restart with 12 to go, Gordon held the 2nd spot where he finished the race.

JG’s comments
“It’s disappointing. We have a lot to hold our heads up high about the way we raced this race and the whole Chase and the whole season. We raced hard and we raced together as a team. But I hope we taught somebody that you can race clean and still go out there and give it your best, and that you don’t have to wreck people to make it in the Chase or win the championship. I’m afraid if it was that ugly these last couple of weeks, it’s going to get really ugly next week. But I couldn’t be more proud of this team. This makes last week hurt that much more. We did everything we could at Martinsville. We did everything we could here and 2nd just wasn’t good enough. Kevin Harvick was in another zip code. There was nobody who was going to get him today. We did a great job finishing 2nd. I’m not happy about it, but at the same time I’m really proud of what we’ve done this year. We’ll go try to win Homestead and end this season on a positive note.” 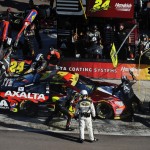 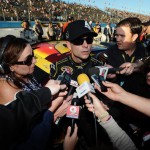 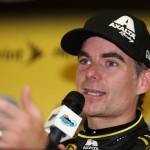