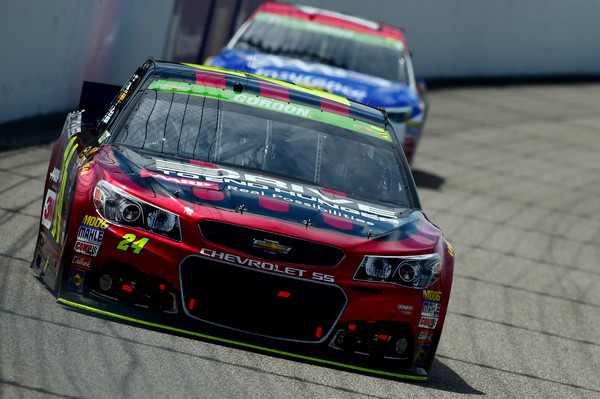 Jeff Gordon posted his 6th consecutive top-10 finish with an 8th place effort at Richmond. It’s the first time since March 2009 that Gordon posted 6 straight top-10’s. However, Gordon battled the handling on longer runs and was unable to seriously contend for the lead during the event. Kurt Busch scored his first win of the season and the 26th of his career to punch his ticket into the NASCAR Chase. Gordon tied Mark Martin with the most lead lap finishes (558) in NASCAR history. After rain washed out the event on Saturday night, the drivers took the green flag shortly after 1pm/eastern on Sunday. Gordon started 11th and moved to 9th in the opening laps. He took 8th from Denny Hamlin on lap 13, and passed AJ Allmendinger for 7th on lap 25. He held the spot until the competition caution on lap 50. Pit stops followed with Gordon restarting in 7th place. He used the inside line to his advantage and took 6th from Matt Kenseth on lap 57. Gordon entered the top-5 with a move around Brad Keselowski on lap 60. Kenseth regouped to take a spot from Gordon lap 64. At the 100-lap mark, Clint Bowyer passed Gordon to send him back to 7th. He moved back into 6th with a pass on Joey Logano on lap 121. The next caution came on lap 128 following Joey Gase’s wreck on the backstretch. Gordon exited pit road in 7th. He slipped to 8th after the restart, but a caution for Josh Wise’s stalled car on lap 137 bunched the field for another restart. Gordon held 8th until the next caution on lap 163 for Wise’s blown engine. Pit stops followed with Gordon gaining two spots to restart in 6th place. Kasey Kahne jumped to the outside line to take a spot from Gordon on lap 170.

Just prior to the halfway point, Jamie McMurray passed Gordon to send him to 8th. He fell to 10th on lap 221 when Jimmie Johnson and Matt Kenseth went by. Gordon dropped to 11th after Dale Earnhardt Jr passed on lap 245. Chase Elliott passed Gordon on lap 253 to send him back to 12th. Gordon came to pit road for a green flag stop on lap 266 and cycled through in 16th place. A caution for Brett Moffitt’s blown tire slowed the field on lap 268, which trapped Gordon a lap down. However, Gordon took the wave-around to get back on the lead lap. He restarted in 15th place on lap 278. Gordon quickly gained two spots, and took 12th from Earnhardt Jr on lap 290. He re-entered the top-10 after passing Ryan Newman and Kasey Kahne. With 86 laps to go, he took 9th from Joey Logano. Ten laps later he took 8th from Martin Truex. A debris caution with 50 laps to go brought pit stops for the run to the finish.

Gordon gained two spots in the pits and exited pit road in 6th place. On the restart with 42 to go, Gordon moved around Brad Keselowski before Tony Stewart spun to bring out a caution with 40 to go. On the restart, Joey Logano dove under Gordon to take a spot before a caution for Jeb Burton’s spin with 32 to go. With 18 to go, Kahne went by to send Gordon back to 7th place. Kenseth took a spot from Gordon with 13 to go. He crossed the finish line in 8th place. 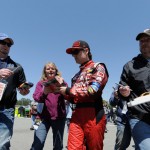 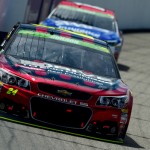 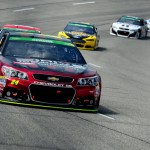