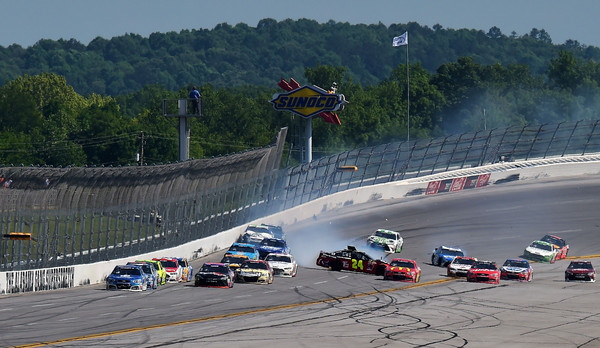 Jeff Gordon led 47 laps at Talladega Superspeedway, but lost track position after a late race pit road penalty and wound up spinning on the final lap. His 31st place finish was his 3rd sub-30th place finish of the season. At the front of the field, Dale Earnhardt Jr scored his first win of the season to qualify for the Chase for the Championship. Gordon posted his 559th career lead lap finish, which moved him ahead of Mark Martin for the most lead lap finishes in NASCAR history.

Gordon started on the pole and led the first 3 laps before moving to the higher line. He got shuffled back to 6th place by lap 5. He regrouped and moved to 2nd behind Dale Earnhardt Jr on lap 15. One lap later he pulled to the inside to regain the top spot. The first caution waved on lap 19 when Brian Scott spun and collected Michael Waltrip in turn 1. Gordon came to pit road for two tires and held the top spot. On the restart, Jimmie Johnson gave Gordon a drafting push on the outside line to keep the race lead. The next caution waved on lap 47 when Trevor Bayne spun on the backstretch and collected a dozen cars in the melee including Joey Logano, David Ragan, Kasey Kahne, Kyle Larson, Landon Cassill, Greg Biffle, and Danica Patrick. The race was red-flagged for 10 minutes to allow for track cleanup. Pit stops followed with Gordon opting for four tires. He restarted in 5th place on lap 52. He slipped to 7th in the middle line prior to a debris caution on lap 56. On the restart, he moved to the inside line and drafted up to 2nd place behind race leader Jimmie Johnson on lap 62. However, he had dropped to 10th in the draft by lap 68. He hooked up with Tony Stewart in a draft to move to 7th place on lap 85.

On lap 90, he moved to the outside line behind Stewart and advanced to 5th. The next caution came on lap 92 for Brendan Gaughan’s wall contact. Pit stops followed with Gordon exiting pit road with the lead after accelerating from the first pit box. Johnson took the lead on lap 98 with help from Dale Earnhardt Jr. He slipped to 8th as the outside line powered past. On lap 101, he moved to the middle line and drafted up to 4th place behind Earnhardt Jr. Drafting help from Carl Edwards thrust Gordon to 2nd place on lap 108. He re-assumed the race lead on lap 112 with a move around Earnhardt Jr. A debris caution slowed the field on lap 115. Gordon held the lead through pit stops and led until 65 to go when Earnhardt Jr took the lead with drafting help from Brad Keselowski. After fading to 12th place, he regrouped and locked into a draft with Johnson on the outside line. He moved to 7th place with 55 laps to go, and ran 4th two laps later. With 50 to go, he ran in 4th in a single line behind Earnhardt Jr, Tony Stewart, and Ryan Blaney. However, he was shuffled out of line and dropped to 17th with 45 laps to go. He then locked into a draft with Sam Hornish and moved up to 11th with 40 to go. Gordon re-entered the top-10 behind Johnson with 33 to go. Gordon came to pit road with 32 to go just prior to a caution for Austin Dillon’s mishap in the tri-oval. However, Gordon received a speeding penalty for too fast entering pit road.

Gordon restarted in 31st place with 26 laps to go. He used the middle line to his advantage and moved to 22nd within a lap of the restart. With 20 to go, he ran in 17th place on the inside line. The field eventually ran in a single line with Gordon in 23rd place with 15 to go. On the final lap, he spun exiting turn 2 and finished in 31st place. Gordon has just 1 top-10 finish in the last 8 races at Talladega.

JG’s comments:
“You have to get to pit road without locking the tires up or speeding. I thought I was plenty conservative there, but the tires are pretty worn out and I just carried too much speed to pit road. I kind of locked the tires up and I was speeding, I couldn’t get the car slowed down. We had an awesome car. We got shuffled back there a little bit. Hats off to Dale Jr and that whole team, and everybody at Hendrick Motorsports. We had amazing cars this weekend. But Dale Jr, you could tell, he was driving super aggressive and you knew he wanted to win this race bad. I certainly know all the fans are enjoying the show, they love to see Dale Jr win this race. But, after that [pit road] issue on my part, we were just in the back trying to make our way to the front. We did a pretty good job of making some spots up. We were going to kind of wait and see what happened on that last lap. Then they started wrecking, We avoided one of them, but we couldn’t avoid the second one.” 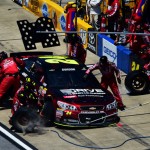 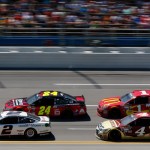 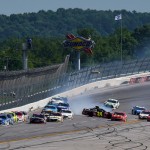