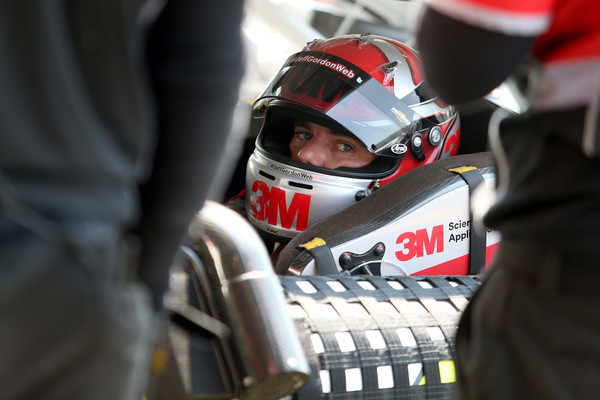 Jeff Gordon’s final career start at Darlington Raceway seemed the like perfect turnaround to his summer malaise. However, a 16th place finish — which was not indicative of his running position through the balance of the event — was his fourth consecutive finish outside the top-15. Barring a driver outside the top-16 in Chase points winning at Richmond, Gordon will qualify for the NASCAR Chase for the 11th time in the 12-year history of the 10-race playoff.

Gordon started 5th and held the spot in the opening laps. The first caution came on lap 7 for a crash involving Brett Moffitt, Cole Whitt and Chase Elliott. On the restart, Gordon dropped to 7th before regrouping to take 6th from Matt Kenseth on lap 22. He re-entered the top-5 with a move around Joey Logano on lap 26. The next caution came on lap 44 for Ryan Newman’s spin. The leaders came to pit road with Gordon exiting in 6th place. He fell to 8th on the restart as Kyle Larson and Carl Edwards went by. He took 7th from Larson on lap 58 prior to a debris caution. Most drivers came to pit road with Gordon opting for tires and restarted in 7th place. He slipped to 8th on lap 88 when Martin Truex passed. A caution for Michael Annett’s spin on lap 109 brought the caution. Pit stops ensued with Gordon exiting in 8th. He took 7th from Kyle Larson prior to a caution for Mike Bliss’ wall contact on lap 120. Gordon came to pit road for tires and restarted in 14th place after several drivers stayed out. He dropped to 17th prior to a caution on lap 134 for Jimmie Johnson’s spin. On the restart, Gordon used fresher tires to his advantage and moved to 12th on lap 140. He re-entered the top-10 on lap 145, and took 9th from Greg Biffle one lap later.

Gordon’s forward advancement continued as he took 8th from Larson on lap 148. However, his progress stalled as Denny Hamlin took a spot from Gordon on lap 160. The next caution came on lap 163 for Trevor Bayne’s cut tire. Pit stops followed with Gordon restarting in 8th place. He used the outside line to his advantage and moved to 6th on lap 170. He passed Denny Hamlin to take over 5th on lap 176. A debris caution slowed the field on lap 189, which brought pit stops. Gordon restarted in 7th on lap 194. He struggled on the inside and dropped to 11th on lap 196 before taking 10th from David Ragan. The next caution came on lap 198 for Ricky Stenhouse’s crash. Gordon moved to 9th on the restart before a caution for Greg Biffle’s spin on lap 208. Gordon ran 8th when the next caution waved on lap 229 for Chase Elliott’s solo crash. Pit stops ensued and Gordon restarted in 9th place. He ran 8th when Trevor Bayne spun to bring out a caution on lap 246. Gordon stayed on the track and restarted in 5th place.

Gordon moved to 4th after the restart, but was no match for Kevin Harvick on fresher tires. He dropped to 6th after JeKurt Busch took a spot. The next caution came on lap 265 for David Ragan’s spin into the frontstretch wall. Gordon came to pit road for tires and restarted 9th. He advanced to 8th prior to the next caution for Ragan’s second crash. Gordon stayed out and restarted in 5th. He held the spot until Kyle Larson passed on lap 300. A debris caution slowed the field on lap 301. Gordon took tires and restarted in 11th place. He slipped to 14th after the restart. The next caution came on lap 307 when Martin Truex hit Kurt Busch in turn 4. Gordon worked through race traffic and ran in 11th place with 35 to go. He slipped to 12th when Kurt Busch went by with 25 to go. Jeb Burton’s spin with 12 laps to go brought out a caution.

The leaders came to pit road with Gordon losing 4 spots and restarting in 16th place. He crossed the line in 16th for his 4th consecutive finish outside the top-15 — the first time that’s occurred since April-May 2012. 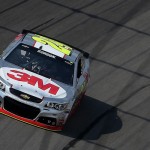 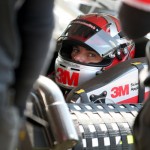 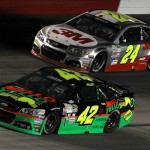