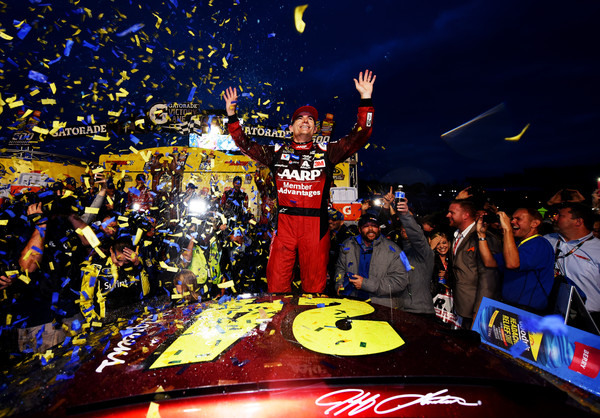 In a day that stretched into night and a race marred by mayhem, Gordon passed AJ Allmendinger with 22 laps to go to win the Goody’s 500 on the sport’s most historic track. With the victory, Gordon’s very first of his final season, he is now guaranteed to be one of four racers who will compete for a championship in Homestead-Miami Speedway on Nov. 22. It was his 9th victory at Martinsville and 93rd of his career.

In an atmosphere Gordon described as “surreal,” he was greeted in Victory Lane by friends and rivals, loudly cheered by the thousands of race fans who stayed to watch him bask in his moment of victory.

“Oh my gosh, I didn’t think they could get any better, but to win here at Martinsville in front of this crowd that stuck around,” said Gordon. “I tell you there’s nothing better than crossing the finish line and have that kind of reaction from the crowd. That reaction from my team, and to have my family come up … this is unbelievable. I feel like I’m dreaming right now. I’m afraid I’m going to wake up and this is not going to be true. We were just trying to do our best throughout the whole day.”

Crew chief Alan Gustafson, who has been through a lot of good and bad with Gordon, agreed with his driver’s gratitude of the fan appreciation. Last week, Gordon won the pole at Talladega; this week the race. Both times, it was to thunderous applause.

“We qualify on the pole, you can just hear the place (Talladega) erupt,” said Gustafson. “I don’t know how to describe the sensation. It’s just an amazing feeling. Then here the same way. You can hear the crowd. You don’t even have to really know what’s going on. You can hear the crowd and you can kind of figure it out.

The reactions of Gordon and Gustafson are understandable. On the whole, this has been a down year for Hendrick Motorsports, the team Gordon has driven for his entire career. Gordon is the lone Hendrick driver still left in the Chase and the Martinsville victory was the first for the team since July Fourth weekend, when Dale Earnhardt Jr. won at Talladega.

For most of the year, Gordon and Hendrick were eclipsed first by Joe Gibbs Racing, which has won 13 of 33 races, and then by Team Penske, which had Joey Logano win three in a row coming into Martinsville.

The Penske duo led 350 of 500 laps on Sunday before both drivers crashed — Brad Keselowski accidentally and Logano after getting run over by Matt Kenseth. Once they were out, the race became Gordon’s to win.

Afterward, Gordon was in disbelief. “It was just unreal. I mean that: unreal. I couldn’t believe that. I thought this could not be happening,” Gordon said. “I mean, it’s not that unusual for us to win a Martinsville race. That’s not what I’m talking about. It’s to be able to do it when so much is at stake, when you know that this is how you get to Homestead, to be one of those final four.

“For us to be a team that nobody, nobody, had picked to be able to make it to Homestead, I love that we just keep proving them wrong and finding a way to move on.” That he has. All the way to NASCAR’s biggest stage. In three weeks, we’ll see what he does when he gets there. 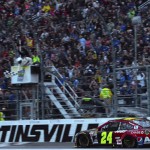 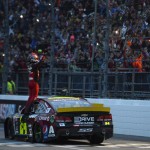 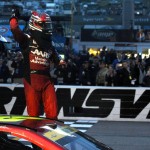 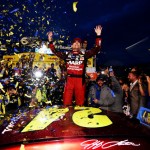 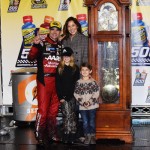 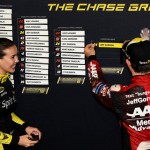