You are here: Home / Feature / All Star Race In Car Audio

May 23 – – Jeff Gordon’s night in NASCAR’s All-Star race didn’t even make it to the end of the first lap. Gordon hit the wall coming off turn 4 on lap 1. The contact hindered handling on the DuPont Chevrolet for the remainder of the night. Gordon was later caught up in a wreck which resulted in a 20th place finish.

Gordon started 8th in the first segment and drilled the wall coming off turn four on the opening lap. He fell from 8th to 11th while battling a tight handling condition due to the wall contact. On lap 40, he moved into 10th where he finished the first segment. Following a pit stop, Gordon started 13th in the second segment of 20 laps. However, he was hindered by tight handling and dropped to 16th before passing Dale Earnhardt Jr for 15th with 5 laps remaining in the segment. Gordon came to pit road several times between segments for track bar adjustments and restarted at the rear of the field. He gained two spots in the opening laps of the third segment and ran 18th. In the closing stages he moved up to 13th where he finished the segment. During the 10-minute break, the Dupont team worked on the track bar and tow of the end in the hopes of improving the handling. Gordon started the final segment 13th and was collected in an opening lap wreck. Gordon hit Mark Martin’s spinning car and damaged the front of the car after hitting the infield wall. The wreck ended a disappointing night for Gordon in NASCAR’s All-Star race. 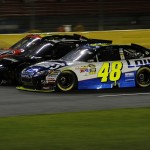 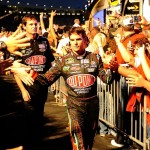 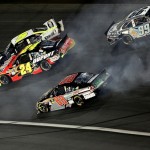