Jeff Gordon didn’t win the Samsung 500, but he scored a much-needed 4th place finish — his first top-5 of the 2012 season. Gordon started 34th and moved to 26th by the end of lap 3. However, his forward progress became more arduous as he gained just three more spots in the next 25 laps. Gordon entered the top-20 with a pass on Kurt Busch on lap 36. Gordon came to pit road under green on lap 45 and cycled through in 16th place. He gained two spots over the next 20 laps and ran 14th on lap 65. The first caution waved for debris on lap 67, which brought the lead lap cars to pit road. After the restart, Gordon took 12th from Tony Stewart on lap 76, and entered the top-10 on lap 85 with a pass on Kevin Harvick. He moved up to 9th before the second caution flag on lap 95 for Trevor Bayne’s wall contact.

Gordon ran in the lower half of the top-10 over the next 50 laps before a cycle of green flag pit stops on lap 145. He moved to 7th on lap 157 and took 6th from Dale Earnhardt Jr on lap 175. Following a cycle of pit stops, Gordon ran in 8th place on lap 200. He quickly moved to 6th by passing Earnhardt Jr and Harvick. Gordon entered the top-5 and then took 4th from Matt Kenseth on lap 264. Following a round of green flag stops with 50 to go, Gordon ran in 5th place. He re-took 4th from Kenseth with 37 laps to go. He crossed the line in 4th, distantly behind race winner Greg Biffle. Gordon scored his first top-5 finish of the season and his best finish in the last 11 races dating back to October 2011.

*Gordon has led at least 1 lap in each of the first 7 races of the season for the first time since 1995.
*He moved up 4 spots in the series standings to 17th.

Turning point
Gordon’s car was hooked up from the outset as he drove the final 200+ laps without a caution. The turning point, ultimately, came on Friday afternoon during his qualifying run. By starting 34th, his chances of a victory were essentially eliminated due to the long green flag run nature of the race.

JG’s comments
“I don’t feel like I’ve had bad luck. A couple of things were self-induced, a couple of things were out of our control, but we’ve been running so well. It’s nice to have everything come together tonight. Starting 34th, we had our work cut out for us, but this team did an amazing job. I’m so proud of everyone on this team. What a race car we had. I mean to drive up through there with only two cautions in the top five. I could almost get to Mark (Martin) there at the end but we had a great night, a great car and we had this many times this year. We just haven’t been able to get it all the way to the finish. So, tonight we finally did. This is something we can build on. I’m so proud of this team and I can’t wait to go to Kansas.” 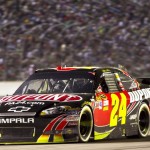 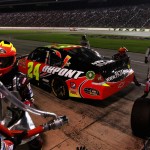 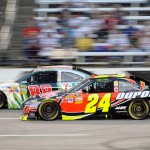 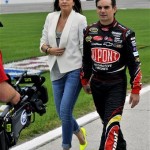 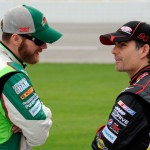 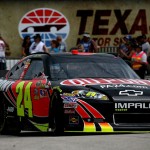 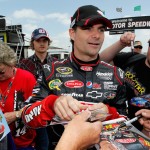 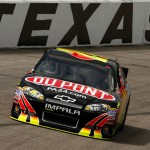 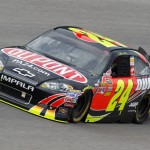