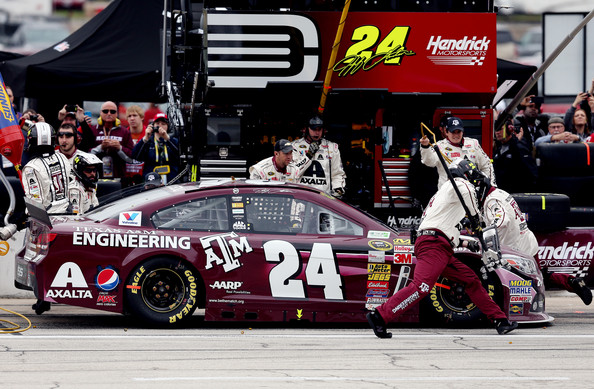 A two-tire gamble for Jeff Gordon nearly worked to perfection at Texas Motor Speedway. Joey Logano edged Gordon for the victory in the Duck Commander 500 after opting for four tires on the final pit stop with 2 laps to go. Gordon had emerged from pit road with the lead, but was passed for the top spot coming to the white flag. Nevertheless, the second place effort gave Gordon the NASCAR points lead for the first time since May 2009.

Gordon started 12th as the field ran the first 10 laps under yellow while crews completed track drying. The green flag waved on lap 11 and the second caution came one lap later when Dale Earnhardt Jr crashed in turn 1 after misjudging the infield grass. Jimmie Johnson, who was running directly behind Earnhardt Jr, sustained damage to the front of his car from the mud on the infield grass. Gordon entered the top-10 on lap 28 and took 7th from Kurt Busch on lap 36. He moved into the top-5 by passing Trevor Bayne on lap 42. The competition caution waved on lap 49 and brought the lead lap cars to pit road. Gordon exited pit road in 4th place.

Gordon took 3rd from Greg Biffle on lap 63 and took the runner-up spot from Tony Stewart on lap 88. He took the race lead during a cycle of green flag pit stops on lap 98. Gordon dropped to 3rd following the stops. He returned to 2nd place on lap 128 with a move around Brad Keselowski. Gordon again took the race lead during a green flag pit stop sequence on lap 142. He came to pit road one lap later and cycled through in 2nd place behind Kyle Busch after Denny Hamlin received a pit road speeding penalty. Gordon tracked down Busch and took the lead on lap 153.

A debris caution on lap 176 slowed the field and brought the leaders to pit road. Gordon held the lead through the pit stop sequence. Keselowski took the lead from Gordon after the restart. As the run progressed, Joey Logano passede Gordon on lap 214 to send him to 3rd. A caution for Kurt Busch’s cut tire slowed the field on lap 219. Pit stops ensued with Gordon restarted 4th on lap 224. He held the outside line and moved to 3rd behind Logano and Keselowski. A debris caution on lap 254 brought the leaders to pit road. Gordon gained a spot and restarted 2nd on lap 259. Keselowski went by on lap 265 to send Gordon to 3rd. He fell to 4th when Kyle Larson passed on lap 296. Gordon came to pit road for the final time under green with 35 to go. Following the stops he ran in 6th place.

He took 5th from Kyle Larson with 25 to go, but gave the spot back with 9 to go. With 2 laps to go, NASCAR waved the caution flag after Kurt Busch cut a tire on the apron. Gordon came to pit road and opted for two tires. He emerged with the race lead for the green/white/checkered finish. However, Joey Logano had four fresh tires and got a run on the #24 car heading into turn 3. He drag raced Gordon to the start/finish line and took the lead as the white flag waved. Gordon held 2nd for the final lap and posted his best finish since winning at Martinsville in October 2013.

Turning point
Gordon was running 6th in the closing stages when a caution for Kurt Busch’s cut tire allowed crew chief Alan Gustafson to gamble on tires. It nearly worked to perfection.

JG’s comments
“We were really strong the first half of the race. When the sun came out, some guys came to the front and we just lost the handling and got real tight. So, it was a great call by Alan Gustafson. Everybody on this #24 team did an awesome job in the pits. I so badly wanted to get this Texas A&M Engineering maroon — and those Aggies — a win here in Texas. I have to thank Axalta Coating Systems for making this possible. They’re a great company. One of the biggest coating companies in the world, and all of our sponsors. That was an awesome race all day so I have to thank the fans for coming out and watching that one. It was a great battle. At one point, I thought we didn’t have a shot at all. We got a pretty good restart. Joey was right on me and I was pretty loose through turns 1 and 2. I wish I would have gone a little bit higher down in turns 3 and 4. He got a run off of turn 4. He got in the back of me and I thought I was going to wreck. So, at that point I was like, ‘Second would be good.’ 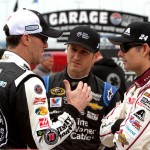 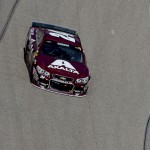 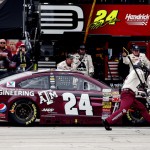