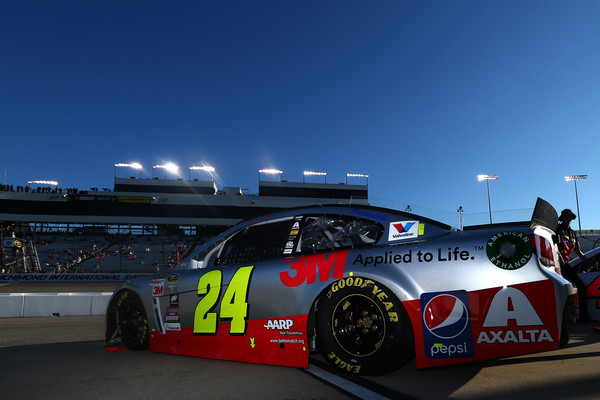 It wasn’t a work of art through the first 26 races, but Jeff Gordon qualified for the NASCAR Chase for the 11th time in the 12-year history of NASCAR’s championship playoff. Gordon’s 7th place effort at Richmond clinched his spot in the Chase.

Gordon started 23rd and was unable to make headway through the opening laps. The first caution came on lap 38 for Martin Truex’s wall contact. Following pit stops, Gordon made his way into the top-20 on lap 50. His forward advancement continued as he took 17th from Ryan Newman on lap 58. Gordon entered the top-15 on lap 70, and took 14th from David Ragan on lap 77. A debris caution brought pit stops just before lap 100. Gordon restarted in 13th place on lap 102. The third caution came on lap 112 for Michael Annett’s crash. Gordon pitted for tires and restarted in 13th. He steadily gained spots and moved into the top-10 on lap 150 with a move around Joey Logano. He took 9th from Kurt Busch, and then passed Carl Edwards for 8th prior to the halfway point.

Gordon took 7th from Kyle Larson on lap 202, but slipped back to 8th when Aric Almirola passed on lap 209. A debris caution on lap 211 brought the lead lap cars to pit road. Gordon lost a spot in the pits and restarted 9th on lap 217. After briefly dropping to 10th, he regrouped to pass Carl Edwards and Kyle Larson for positions to run 8th on lap 230. A debris caution brought the leaders to pit road on lap 290. He held 8th through the round of pit stops, but moved to 6th place after Brad Keselowski and Jamie McMurray were penalized for speeding on pit road. Gordon entered the top-5 for the first time with 93 laps to go with a move around Jimmie Johnson. However, he fell out of the top-5 when Dale Earnhardt Jr took the spot with 89 to go. Gordon dropped to 7th when Almirola passed with 55 to go. With 26 to go, NASCAR threw a caution for debris. Pit stops followed with Gordon holding the 7th position. He crossed the finish line in 7th to clinch a spot in the NASCAR Chase.

JG’s comments
“It was a really solid night, so I’m proud of all the guys on the team. The first run I was a little nervous, we were hovering around 21st. We made a slight adjustment and started going to the front. I don’t know if we were a top-5 car, but we were definitely a top-10 car. Finished 7th, I’m just so excited we finally had a solid night on pit road, on the racetrack with the car, communication — everything was just really solid. So, that gives us something to be excited about over the next 10 races. These guys have been working so hard. I know everybody works hard, but they haven’t been getting the rewards of that hard work. So it’s nice to be in the Chase and take that breath and reset and see what we can do over the next 10.

ON HENDRICK MOTORSPORTS:
“We’re behind, we know that. (Joe Gibbs Racing) is unbelievable. But there’s a lot of ways to make it to Homestead. There’s a lot that can happen. We’re working as hard as anybody to try to see what we can do better, learn from our competitors, and try to catch up. We’re definitely playing catch up. I think Dale Jr is probably the best in our stable right now. He proved that again tonight. But we work hard together to try to improve. If we continue to do that, we’ll make gains.”

ON THE CHASE:
“I’m excited about it. That’s a lot of pressure in this final season to make the Chase, so I’m glad we finally got that done.” 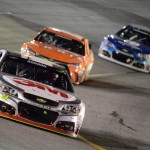 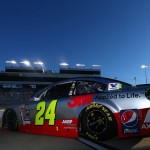