You are here: Home / Archives for Food City 500 in Support of Steve Byrnes 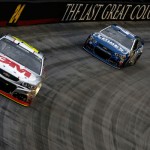 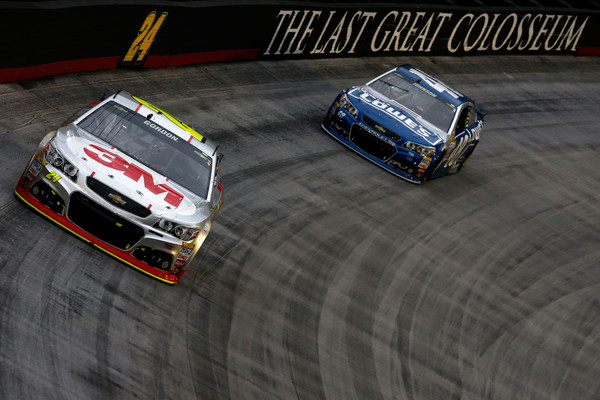 ​Jeff Gordon posted his best finish of the 2015 season with a 3rd place effort in the Food City 500 at Bristol Motor Speedway. The event concluded more than 9 hours after its scheduled start time because of persistent rain in East Tennesee. Gordon finished behind race winner Matt Kenseth and runner-up Jimmie Johnson after battling back from 2 laps down. It was his 5th consecutive top-10 finish — the first time Gordon has scored 5 straight top-10’s since June 2010. Steady rain delayed the start of the race by more than an hour. Jeff’s children, Ella and Leo, gave the command for drivers to start engines just before 2:30 pm. Gordon started 23rd and moved to 19th within 10 laps. The first caution waved on lap 18 for a wreck involving Brad Keselowski and Joey Logano. The crash moved Gordon up to 17th place and — more importantly — gave him an entry out of his pit box with Logano going several laps down. Rain picked up once again and the event was red flagged at 2:40 pm. After nearly four more hours of rain and subsequent track drying, the race resumed just before 7 pm.

Gordon restarted in 16th place on lap 35. He used the high line to his advantage and moved to 12th by lap 40. Gordon remained there as the competition caution slowed the field on lap 60. Pit stops followed with Gordon restarting in 14th after some drivers opted to stay out. Gordon advanced to 11th by lap 70, and entered the top-10 with a move around Sam Hornish on lap 77. At the 100-lap mark, Gordon ran 7th after passing his Hendrick Motorsports teammates Kasey Kahne and Dale Earnhardt Jr. He took 6th from Greg Biffle on lap 133. The next caution came on lap 168 for dampness on the track. Pit stops ensued with Gordon restarting in 7th place.

Gordon dropped to 8th on lap 200 and radioed to his crew about a loose wheel. He came to pit road for a 4-tire change on lap 206. He rejoined the race in 29th place, 2 laps down. Gordon moved up to 25th place by lap 225, but remained 2 laps down. At the halfway point, Gordon ran in 23rd place, and was the first car 2 laps down. On fresher tires, Gordon passed race leader Kevin Harvick on lap 254 to get a lap back. However, Carl Edwards went by Gordon to put him 2 laps down just prior to a caution flag for passing rain on lap 262. Gordon took the wave around and moved to 19th place, 1 lap down. The rain picked up and the red flag was displayed just after 8 pm. The field went back under the yellow flag 20 minutes later. A caution for Kurt Busch’s spin into Jimmie Johnson on lap 278 brought out the caution. Following a pit sto, Gordon moved up to 18th — the first car one lap down.

Gordon got back on the lead lap when the caution waved on lap 311 when Johnson spun out Jeb Burton. In the melee, Kevin Harvick made contact with David Ragan, which eliminated both drivers from contention. Gordon restarted in 16th place on lap 325. The next caution waved on lap 344 for debris. Gordon came to pit road for tires and restarted in 16th place on lap 350. The next caution came on lap 367 when Landon Cassill drilled the wall head-on after contact from Kyle Larson. Gordon stayed on the track and restarted 12th after several cars pitted. On lap 382, Gordon used the high line to move up to 9th place. Two laps later, he advanced to 7th place and closed in on Carl Edwards for 6th. He moved to 6th place on lap 437 when Kyle Larson pitted from the race lead. One lap later, he moved around Edwards to take 5th place. Gordon took 4th from Jamie McMurray on lap 446, and two laps later passed Ryan Newman for 3rd. Edwards regrouped and took a spot from Gordon on lap 455. With 29 to go, McMurray cut a tire and a chain reaction wreck occurred in turn 4 as Josh Wise and Clint Bowyer piled in.

Gordon stayed out and moved up to 3rd place when Kurt Busch pitted from the lead. On the restart with 20 laps to go, Austin Dillon used the high line to take a spot from Gordon. A multi-car wreck with 17 to go brought the caution after Tony Stewart turned Kasey Kahne. Gordon lined up on the outside line for the restart with 9 laps to go. Gordon moved to 2nd place behind Matt Kenseth. Edwards lost control underneath Gordon and hit the wall. Kurt Busch drilled the back of Edwards, and the melee collected Paul Menard and Justin Allagaier. On the green/white/checkered restart, Gordon lined up on the inside of Kenseth. Johnson was able to get past Gordon on the restart. Gordon crossed the line in 3rd place, his best effort of the 2015 season.

JG’s comments
“That was tough. On such old tires you have to carry momentum to the line and not spin the tires. Then you have guys on fresher tires behind you. I thought I got a good restart, as good as I could ask for to be on the bottom lane. I’m pretty happy to come home 3rd. Yeah, at one time it looked like we could maybe get 2nd. That was just chaos. For us, it was chaos the entire race. We had a really good car. We had a loose wheel and had to come from behind. I didn’t think we had the best car on that last long run. I thought Carl was pretty good, Kurt was really strong. We were building a top-5 out of it. I certainly didn’t like NASCAR running us around under caution for so long (in the rain). I thought we were going to run out of gas. I hate it for the 3 team. Happy for Matt. I think he deserved it. They had a good car and it would have been a shame if he had run out of gas. So, great job to him.” 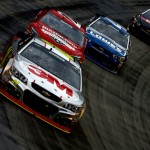 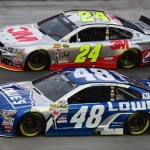