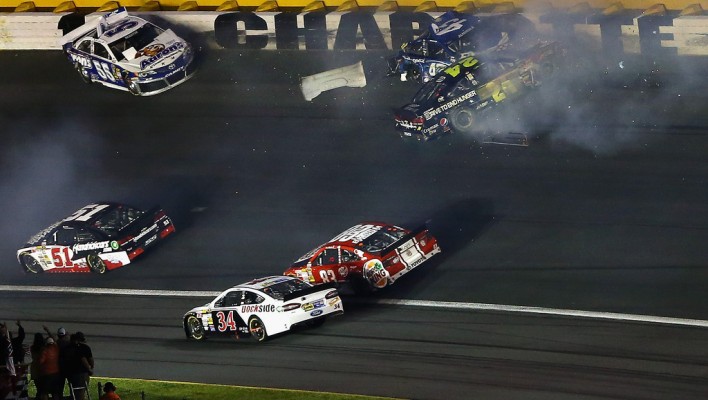 As the day became night during the Coca-Cola 600 at Charlotte Motor Speedway, it appeared that Jeff Gordon’s #24 car was on its way to a top-5 finish. However, a pit stop and ill-timed caution flag trapped Gordon a lap down. He was later collected in a multi-car wreck and finished 35th — his 3rd DNF of the season. The restart came on lap 130 as dusk descended over the track. Gordon moved into the top-10 prior to a round of green flag pit stops on lap 176. He took 9th from Kevin Harvick on lap 194 and ran 8th at the halfway point of the race. Green flag stops came on lap 222 with Gordon holding 8th place. He took 7th from Carl Edwards on lap 233 before a debris caution slowed the field on lap 242. Gordon entered the top-5 with a move around Denny Hamlin on lap 254 and took 4th when Kyle Busch’s engine expired. The caution waved on lap 258 for a multi-car incident after Dale Earnhardt Jr, Greg Biffle, and Dave Blaney made wall contact. Gordon scraped the wall and came to pit road for two tires. He restarted in 4th place and closed in on Kurt Busch for 3rd as his Hendrick Motorsports teammate Kasey Kahne took the race lead. However, he was unable to make headway and dropped to 5th behind Martin Truex on lap 295. He came to pit road on lap 303 just as a debris caution waved. Gordon was trapped a lap down and opted to come back in for left side tires.

Gordon restarted in 15th place with 90 laps to go. He fell to 16th prior to a debris caution with 88 to go. On the restart, Gordon dropped to 19th just before a crash involving Brad Keselowski and Danica Patrick. Gordon came to pit road for tires and restarted in 19th place. Just after the restart, Gordon was involved in a multi-car wreck in turn 1 that ended his night with a DNF.

Turning point
Gordon came to pit road on lap 303 just as the yellow flag came out. By stopping, he was trapped a lap down and was later collected in a wreck racing backmarkers in the middle of the pack.

JG’s comments
“We were a victim of the caution coming out when we were on pit road. We shouldn’t have stopped in the box to do that pit stop and we would have still been on the lead lap. Instead, we were racing three-wide. That’s what’s going to happen. I mean we were just going for the Lucky Dog you know, and you’ve got to be real aggressive back there. I got beat on the restart before that with (Marcos) Ambrose and messed that one up; so I just hate we were even back there.I loved the patriotic colors on our car this weekend and it’s just a shame we were even back there. We couldn’t win. Kasey (Kahne) is unbelievable. But we had a Top 5 car.” 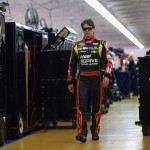 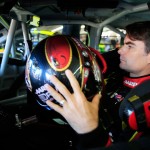 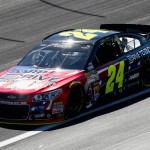 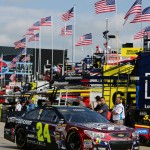 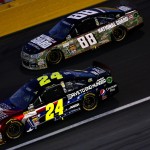 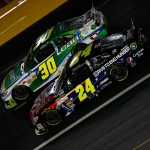 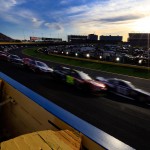 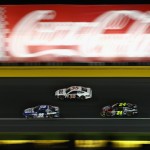 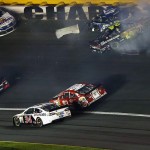 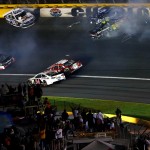