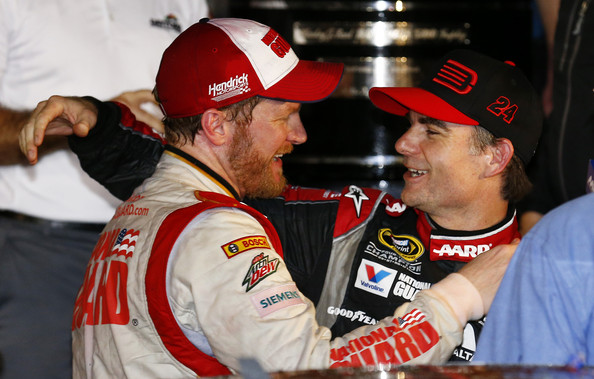 Dale Earnhardt Jr captured his second Daytona 500 victory and snapped a 55-race winless streak on a long day at Daytona International Speedway. The season-opening race was delayed more than 6 hours by rain, with the finish coming just before midnight eastern time. Jeff Gordon helped propel Earnhardt Jr to a commanding lead on the final restart and finished in 4th place — his best Daytona 500 finish since winning in 2005.

Gordon started 6th and got a push from Kurt Busch to move to 2nd on lap 2. One lap later he went to the inside line and slipped back to 9th place as the field ran in single file. The first caution waved on lap 23 for Kyle Larson’s spin in turn 2. Gordon’s crew changed two tires and he restarted in 6th on lap 28. He stayed in the high line and moved up to 3rd behind Paul Menard and Denny Hamlin. However, the inside line began moving and dropped Gordon back to 7th. The next caution waved on lap 33 for Martin Truex’s engine. Rain began falling during the caution period which resulted in a red flag condition for more than 6 hours.

The race resumed under a dark sky just before 9pm. Gordon held the inside line and moved to 5th by lap 55, but eventually was caught in the middle line and faded back to 12th on lap 61. He hooked up in a draft with Kasey Kahne and moved back up to 7th on lap 70. One lap later he came to pit road for a 4-tire change. Gordon ran 17th at the halfway point of the event. He came to pit road on lap 119 for two tires. Following the stops, Gordon ran in 13th place. On lap 144, Gordon barely avoided a wreck when Aric Almirola spun across the track coming off turn 4. Gordon was just ahead of Almirola’s spinning car. On the restart, Gordon moved up to 11th in a draft behind Joey Logano. With 40 laps to go, Gordon moved to 7th on the inside line behind Matt Kenseth. A multi-car wreck with 38 laps to go was trigged when Austin Dillon hit Kyle Larson in turn 4. Marcos Ambrose and Kasey Kahne were collected in the melee.

Gordon restarted in 6th with 32 laps to go. He worked into the draft behind Jimmie Johnson and Dale Earnhardt Jr to run 5th with 29 to go. He moved to the middle and ran behind Greg Biffle in 7th place with 22 to go. He followed Biffle to the low line and ran 6th with 20 to go. One lap later, Denny Hamlin dove low and put Gordon in the middle, which pulled him back to 7th place on the high line. A caution for Trevor Bayne’s crash on the backstretch slowed the field with 16 laps to go. With 12 to go, Gordon ducked to the bottom line to move into a line behind Johnson and Earnhardt Jr. With 9 to go, Gordon was pushed to 2nd by Brad Keselowski. With 7 to go, Gordon moved to the high line and dropped to 3rd behind Keselowski. A wreck with 6 laps to go was started when Dillon hit Ryan Newman in turn 3, which collected four drivers.

Gordon restarted 3rd behind Earnhardt Jr with 2 laps to go. He gave him teammate a needed push on the restart before settling in behind him. He finished in 4th place — his best Daytona 500 finish since winning in 2005.

Turning point
Gordon ran in 7th place with less than 20 laps to go, but worked his way forward into a drafting line with his Hendrick Motorsports teammates in the closing stages.

JG’s comments
“I’m so excited for Hendrick Motorsports right now. Congratulations to Dale, that’s so cool. I know how excited his fans are. Rick Hendrick, another Daytona 500 victory. Three Hendrick cars in the top-5 was spectacular. I don’t know what happened when the rain went away and the track dried. Everybody’s brain just flipped over to, ‘this is a shootout.’ It was unbelievable the kind of racing with two- and three-wide, bump drafting. Just craziness. For awhile we didn’t have great track position, I was just hanging on trying not to wreck and seeing other guys do the same thing. We got through some wrecks and then we really started having things go our way with some good pushes and picking the good lines.”

ON THE LAST LAP
“I gave Dale Jr a great push when we took the green so we got a good start. The 99 (Carl Edwards) got to my bumper and we started going. Then he got kind of sucked off of me so I was just a sitting duck along for the ride from that point. I saw Jimmie Johnson going three-wide behind me. My lane started going backwards. But when he got to me, he gave me a huge shove. The 11 (Denny Hamlin) pulled down in front of me and our lane just went. At that point, I was like, ‘maybe we can get to Junior.’ But at the same time I thought anything in the top-3 without a wrecked car would be a great finish. We wanted to win bad and we had a car that could, but we’re also excited to see Junior win it.” 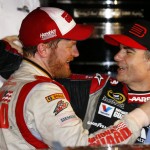 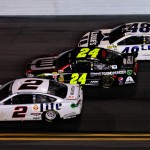 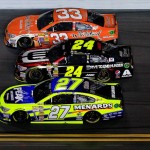