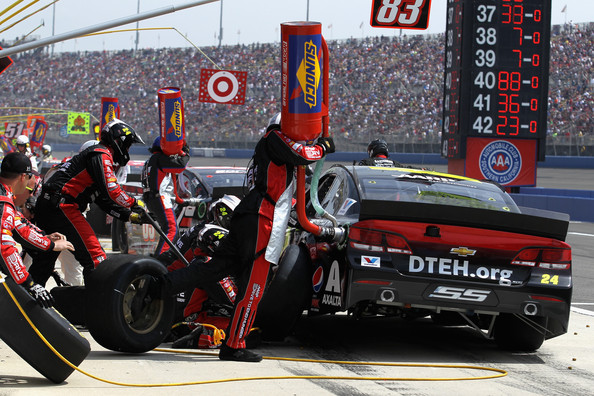 Jeff Gordon was less than 2 laps from victory in the Auto Club 400 in Fontana, Calif. He had the dominant car on longer runs and took the race lead after Jimmie Johnson experienced tire problems in the closing stages. However, Clint Bowyer’s flat tire and subsequent spin brought out the caution flag. Gordon came to pit road for tires, but lost momentum on the restart to finish 13th.

Gordon started 6th and moved into the top-5 within 2 laps. He advanced to 3rd by lap 7 with passes on Matt Kenseth and Kevin Harvick. Gordon took the runner-up spot from Clint Bowyer on lap 14. The first caution waved on lap 18 for Harvick’s flat tire. Gordon came to pit road for tires and incurred a pit road speeding penalty, which dropped him to the rear of the field for the restart on lap 23. He moved up to 34th within one lap of the restart and ran 25th on lap 30. Gordon’s forward progress continued as he moved to 15th on lap 40 and ran 11th when the second caution waved on lap 42 for Dale Earnhardt Jr’s flat tire. Pit stops ensued with Gordon restarting 12th on lap 48. He re-entered the top-10 on lap 52 with a move around Kurt Busch. Gordon moved to 7th on lap 55 by getting around Matt Kenseth and Kasey Kahne. Two laps later the caution waved for Tony Stewart’s spin on the backstretch. Gordon stayed on the track after seeing the red light on pit road. As a result, he came to pit road on the following lap and restarted in 35th place. Once again, he moved through the field and ran 23rd on lap 66. Contact between Brian Scott and Aric Almirola brought out the caution on lap 70 with Gordon up to 19th place.

Following pit stops, Gordon restarted in 19th place on lap 75. He quickly moved up to 11th within two laps of the restart. Gordon re-entered the top 10 on lap 77 and took 8th from Kyle Larson on lap 78. He climbed to 6th with a pass on Greg Biffle on lap 80. After passing Kevin Harvick and Kyle Busch, Gordon was running 4th when the next caution waved on lap 86. He came to pit road for tires and exited in 3rd place. Gordon briefly dropped to 4th before regrouping and took 2nd from Kenseth on lap 97. He took the race lead from Jimmie Johnson on lap 106 and pulled out to a comfortable lead. The caution waved on lap 118 for Carl Edwards’ spin after a flat tire. However, a 14-second pit stop dropped Gordon back to 4th place for the restart. He took 3rd from Kyle Busch on lap 127 and passed Kenseth for 2nd place on lap 131. A debris caution slowed the field on lap 142 just as Gordon moved low to make a bid for the race lead. Pit stops followed and Gordon restarted in 3rd place with 52 laps to go.

Gordon bided his time after the restart and took 2nd from Kenseth with 44 to go. As Gordon closed in on Johnson for the race lead with 34 laps to go, the caution waved for tire debris. He held the runner-up spot through the round of pit stops. On the restart with 27 to go, Gordon held the 2nd spot. He closed in on Johnson but was unable to make the pass. However, Johnson sustained a left front flat with 6 laps to go, which gave Gordon the race lead. Clint Bowyer’s cut tire and spin brought out the caution flag with 2 laps to go. Gordon came to pit road for tires and restarted in 7th place for the green-white-checkered finish.

Turning point
With Gordon in the lead with 2 laps to go, a cut tire and spin by Clint Bowyer brought out the caution flag, which negated a near-certain victory. 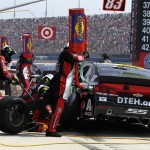 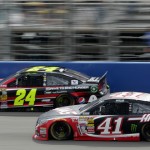 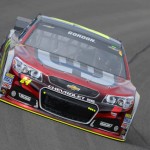