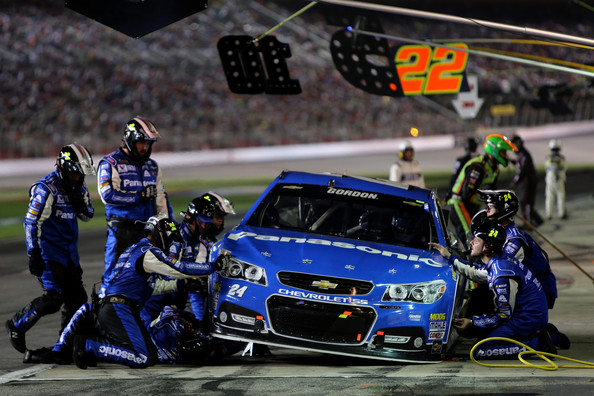 For the first 75 laps, it seemed that Jeff Gordon had the 2nd best car on the track. He was unable to take the race lead from Kevin Harvick, but was running solidly in 2nd when he cut a tire and hit the wall on lap 77. Gordon lost 2 laps and spent the remainder of the night passing cars despite being laps down. Gordon was able to get back on the lead lap in the closing stages due to cautions and finished 17th. Gordon’s Hendrick Motorsports teammate Kasey Kahne claimed the victory and clinched a spot in the Chase for the Championship

Gordon started 9th and moved into the top-5 within 3 laps after the outside line struggled on the start. He took 4th from Aric Almirola on lap 6 and moved around Matt Kenseth for 3rd one lap later. Gordon passed Kyle Larson for 2nd on lap 8 and closed to within a second of race leader Kevin Harvick. However, Gordon was unable to make significant headway and dropped to more than 4 seconds behind Harvick by lap 30. The first caution waved on lap 38 which allowed Gordon to erase the 7-second lead that Harvick had opened. Pit stops followed with Gordon restarting in 2nd place. He stayed with Harvick for about 5 laps before the lead widened to more than 3 seconds by lap 70.

A debris caution on lap 208 brought pit stops. Gordon once again came to pit road for tires and restarted in 23rd place. He held the spot until a debris caution on lap 255. He restarted in 22nd place with 63 to go and moved to 21st, but remained 2 laps down. A caution for Brad Keselowski’s wall contact slowed the field with 28 to go. Gordon restarted in 20th with 24 laps to go. A caution for Kyle Busch getting into Martin Truex brought out the caution with 2 laps to go. The #24 car stayed on the track for the wave-around and restarted 1 lap down in 20th place. On the restart, Kevin Harvick was squeezed into the wall to bring out the caution. Gordon received the free pass to get back on the lead lap.

Gordon restarted in 18th place and advanced to 17th when the checkered flag waved. It was his 3rd finish below 15th in the last 4 races.

Turning point
A cut left front tire on lap 77 sent Gordon into the turn 3 wall and made the rest of the night an uphill climb. 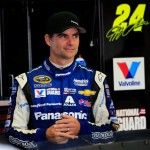 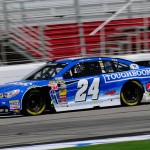 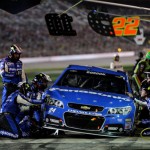