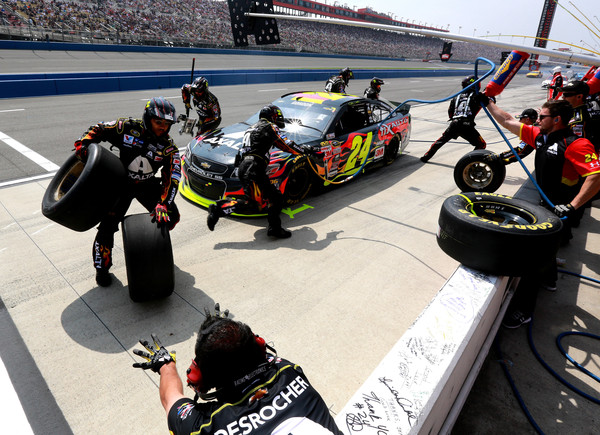 Brad Keselowski passed Kurt Busch heading into turn 1 of the final lap to win the Auto Club 400. Busch, who led the most laps, finished third after Kevin Harvick passed him coming to the finish line. Jeff Gordon battled handling issues for the balance of the day before a late race gamble gave him a chance to salvage a solid finish on a green/white/checkered restart. However, a caution necessitated a second restart which hurt his chances on older tires. Gordon’s second consecutive top-10 finish moved him up to 22nd in the series points standings.

Gordon started 7th and dropped to 10th within three laps. As the tire pressures came up, Gordon advanced to 8th by lap 10. The first caution waved on lap 22 when Gordon pulled up behind David Ragan in turn 3, which sent the #18 car into a spin. Pit stops followed with Gordon exiting in 7th place. He battled handling during the run and fell to 11th on lap 35. Gordon stayed out to lead a lap during a green flag pit stop sequence before coming to pit road on lap 63. He cycled through in 14th place on lap 65, and advanced to 12th by lap 70. A debris caution slowed the field on lap 86 with Gordon in 13th place. Pit stops ensued with Gordon exiting in 17th place. He moved to 13th prior to a caution on lap 98 for Sam Hornish’s wall contact. Gordon came to pit road for tires and adjustments, and restarted in 21st place.

Gordon got a strong restart and advanced to 16th on lap 110. One lap later he took 15th from Carl Edwards. His forward advancement continued as he took 12th from Tony Stewart on lap 120. He came to pit road for a green flag stop on lap 138 and cycled through in 12th place. A debris caution on lap 152 brought the leaders to pit road. Gordon restarted in 12th with 42 laps to go, and moved into the top-10 with 39 to go. However, he hit a proverbial wall and fell to 12th with 36 to go as Kasey Kahne and Ryan Newman went by. With 25 to go, he dropped to 14th after Joey Logano passed. A debris caution with 15 to go brought pit stops. Gordon restarted in 12th with 11 laps to go. Gordon got a strong restart and moved into the top-10 within a lap. With 9 to go, he took 8th place. However, Kasey Kahne passed with 4 to go to send Gordon to 9th place. He dropped to 10th prior to a debris caution with 2 laps to go, which set up a green/white/checkered finish. Gordon opted to stay out and restarted with the race lead.

On the restart, Gordon dropped to 3rd as Kevin Harvick and Kurt Busch went by. Debris on the backstretch brought a caution flag to set up another green/white/checkered restart. Gordon slipped back on the inside line and crossed the finish in 10th position. 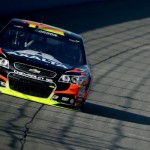 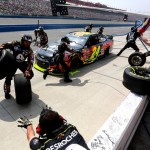 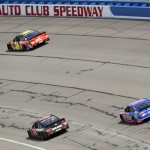