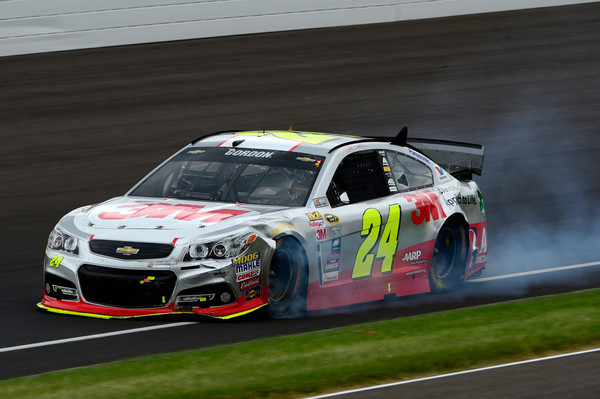 Jeff Gordon’s final race in his adopted home state of Indiana was a 42nd place finish in the Brickyard 400. Gordon was running 15th when Clint Bowyer spun ahead of him. He swerved with Kasey Kahne on his outside and lost control. The car spun and made heavy contact with the left front and rear. Repairs in the garage were needed and Gordon finished more than 50 laps down.

Gordon started 19th and gained three spots in the opening laps to run 16th on lap 5. He advanced to 15th on lap 10, but slipped back to 16th after Matt Kenseth passed one lap later. He came to pit road for a green flag stop on lap 30, which also included chassis adjustments. Gordon cycled through in 15th place. The first caution waved on lap 44 for debris. Pit stops followed with Gordon restarting in 15th place. However, Gordon swerved to avoid Clint Bowyer’s spin on lap 51 and spun into the wall on the short chute between turns 3 and 4. The car was heavily damaged and Gordon lost 3 laps on pit road while repairs were made. After being unable to maintain minimum speed, Gordon brought the damaged car to the garage for more extensive repairs on lap 71.

Gordon returned to the race and was 54 laps down. He gained a spot because of attrition and finished in 42nd place. It was his worst finish since August 2008 when he finished 42nd at Michigan. He remains 12th in the NASCAR Chase standings.

JG’s comments
“I was underneath Kasey Kahne. We were just racing for position. I saw Clint Bowyer get sideways. I don’t know what caused it. Kasey and I were trying to check up to avoid it. I don’t know if he got loose, or we just both got loose together. Then I just lost control and got in the wall. We’re never going to give up. We got back out there as fast as we could, but the splitter is too torn up on the front. It was really creating lift and the car didn’t have any front downforce so it was pushing really bad.” 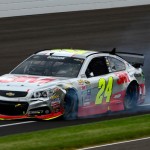 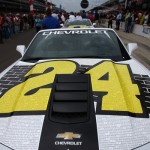 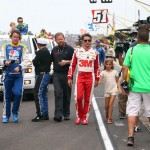