Not even a pole position could change Jeff Gordon’s bad luck in 2012. Gordon was caught up in a wreck with 45 laps to go at Talladega Superspeedway and finished 33rd. It was his seventh finish of 21st or worse in the last 12 races. He lost six spots in the series points standings and is now 23rd — the lowest after 10 races in his NASCAR career.

Gordon started on the pole and dropped to 6th on the opening lap before his Hendrick Motorsports teammate Kasey Kahne picked him up in the draft. On lap 6, Gordon moved to the high line and dropped back to 28th place in an effort to cool the engine. By lap 10, he was running 30th and seemed content to stay out of the lead pack. The first caution waved on lap 16 for Regan Smith’s blown engine. Gordon restarted 19th and locked into a draft with Jimmie Johnson and Dale Earnhardt Jr. The trio moved into the top-10 by lap 25, but separated within 5 laps. Gordon dropped to 15th before regrouping on the outside line. He worked with Marcos Ambrose and moved to 2nd place on lap 53. He came to pit road for a green flag pit stop on lap 59 and opted for left side tires. Following stops, Gordon ran in 3rd place behind Earnhardt Jr and Matt Kenseth.

On lap 75, he opted not to give Earnhardt Jr a drafting push and radioed to his crew about evening the tally with his “teammate” — a reference to getting hung out in the draft earlier in the race. On lap 85, Gordon dropped back after his water temperature began spiking. He ran in 28th before green flag pit stops on lap 101. Gordon took right side tires and returned to the race in 8th place.

With 45 laps to go, a melee in turn three collected Gordon when he went low to miss it. Martin Truex came down the track and hit the side of the #24 team. Gordon drilled the outside wall with the right front of the car and drove to the garage area with his second DNF of the season.

Turning point
A melee in turn three with 45 laps to go ended Gordon’s day at Talladega.

JG’s comments
“This is one of the most bizarre years this team has ever gone through. It’s almost comical at this point. It looked like someone came down and got Martin and that turned him into me. That’s just the way our season has been going.” 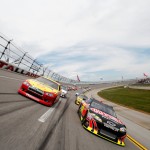 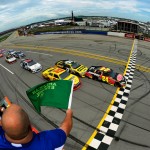 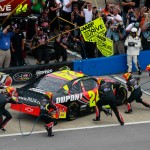 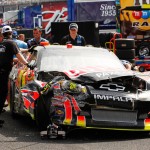 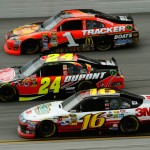